His insights and equations are fundamental to weather forecasting, climate modelling etc 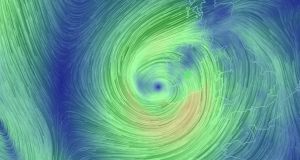 Storm Ophelia over Ireland: ‘In every weather forecast, in every climate model, somewhere deep down in the code the fundamentals of that are the Navier-Stokes equations. They underpin everything.’

George Gabriel Stokes was born in Sligo 200 years ago, but his influence is still writ large across science and technology today. In fact, it felt a little strange to ask scientists how Stokes has enabled their work, because his insights and equations are so fundamental to a range of activities including weather forecasting, climate modelling, understanding turbulence and improving the diagnosis of disease.

One of Stokes’s ideas was immediately useful for weather analysis. Stokes was key to improving a ‘self-registering sundial’ developed by John Francis Campbell, and the resulting Campbell-Stokes sunshine recorder uses a sphere to focus sun rays on a piece of card, then the level of burning on the card gives an indication of how long the sun has shone on it.

“Much of the measurement of sunshine has now been automated, but there are still a lot of Campbell-Stokes sunshine recorders in use in our voluntary observing network,” says Séamus Walsh, head of climatology and observations at Met Éireann.

Where Stokes has had a far deeper influence on weather forecasting and climate modelling is through the Navier-Stokes equations, which describe how viscous fluids move.

Unlike the sunshine recorder, the Navier-Stokes equations had to wait for their time to shine in meteorology.

“Until the 1950s, they were really just a mathematical concept,” explains Walsh. “Then the growth of computing power meant that computers could start to solve these equations in a numerical way. That meant we could simulate the atmosphere with computers and play the movements forward a little in time, building up information for a forecast.”

“The atmosphere is a thin layer of fluid on a rotating sphere, you can boil it down to that, and the Navier-Stokes equations provide the ‘instructions’ for the computer simulation of how the fluid moves,” he says. “Without those equations, you would have no computer forecasting models.”

Despite their everyday use in meteorology, though, the Navier-Stokes equations retain much mystery, notes Clancy. “Their pure mathematical properties are still elusive,” he says. “But in practical, day-to-day terms they are used by everyone and they are very useful.”

Engineer Dr Kevin Nolan found plenty of use for Stokes in his work at Imperial College London on understanding turbulence. “When air passes over a car or aircraft and there are lots of fluctuations in the flow, you see these beautiful patterns or ribbons and swirls, much like you see on the planet Jupiter,” he says.

“My work was looking at how these turbulent structures form, because they create drag for vehicles and you want to reduce them, and the Navier-Stokes equations were fundamental to understanding that.”

Now a lecturer at University College Dublin’s School of Mechanical and Materials Engineering, Nolan is looking to create turbulence in micro-channels of liquid to help remove heat from high-performance computer chips, such as those found in telecommunications networks.

“If you have a microchannel, the liquid moves fast in middle and slow at wall and the heat has to move from layer to layer,” he explains. “You want the swirls of turbulence in there to speed up the heat transfer, much like when you burn your finger you put it under moving water, that helps to carry the heat away faster.”

In Dublin City University – which named its engineering building after Stokes – Dr Jennifer Gaughran is also leaning on Stokes in her work with microfluidics. She researches ways to process tiny samples of blood for faster and more efficient diagnosis of disease, and this involves passing the samples along narrow microfluidic channels.

Stokes was also a pioneer of fluorescence, which is widely used to label microscopic objects of interest and see them, and again Gaughran makes frequent use of it.

“Stokes was involved in many aspects of early physics that have gone on to have applications across science and technology,” she says. “And I suspect a lot of people use his insights, but they are so fundamental that we don’t even think about them too much, they are simply useful.”