Partial eclipse of the moon to take place tonight 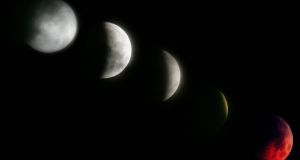 A partial eclipse of the moon could be visible from Ireland on Tuesday night on what is also the 50th anniversary of the launch of the first moon landing.

The eclipse will begin as the moon rises in Ireland, just before 10pm. Lunar eclipses occur when the Earth crosses between the sun and moon, casting a shadow on the lunar surface.

Astronomy Ireland is setting up telescopes at its headquarters in Rosemount Business Park, Blanchardstown, to watch the eclipse.

David Moore, founder and chairman of the organisation, will also be giving a talk from 9.30pm on lunar eclipses and astronaut Neil Armstrong’s Irish links. The event is free with no booking required.

“There won’t be another eclipse for two years, and even then it won’t be as good as this one. For this you have 65 per cent, about two-thirds of the moon will go into the Earth’s shadow. There will be less than half in the next one in November 2021,” Mr Moore said.

“It’s a very slow affair, it will go from about the time the moon rises just before 10pm until the moon leaves the Earth’s shadow at 11.59pm. The best time, when it is deepest in the shadow, is about 10.30pm.

“You’ll see that there’s a whole chunk of the full moon missing, you’ll also see the edge of the shadow. When you get a total eclipse of the moon, the whole moon turns a sort of dull coppery red, and you should be able to see that reddish colour on the part of the moon deepest into the Earth,” Mr Moore said.

The Astronomy Ireland chairman said just “a break or two in the clouds” is needed for the eclipse to be visible.

“Most of it is visible to the naked eye or if you’ve got a pair of binoculars – you probably don’t need a telescope to see it though,” he said.

Astronomy Ireland is asking the public to send in photographs of the eclipse.

Met Éireann said the weather is due be dry early on tonight apart from a residual shower in the east. However, later on in the night a spell of heavy rain will move in from the Atlantic to affect the west and north.

Lowest temperatures will be between 12 and 15 degrees.