Searching for carbon-neutral heaven in a world hellbent on waste 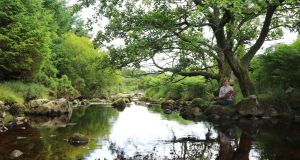 Are you off anywhere nice on your holidays? I am, and, as the date for departure from Dublin Airport creeps nearer, the excuses I’m making for taking a flight are getting increasingly elaborate. “I’m travelling with family, they hate the ferry, so I’ve no choice.” “The train doesn’t go where I’m staying anyway.” And, my best one, “I’ve got my own woodland so I’m probably carbon negative.”

It’s true, I do own a small woodland. It’s bordered by thick, healthy hedgerows on three sides and a river on the fourth, with patches of meadow throughout. My family afforested it with a mix of native and non-native broadleaves over two decades ago and I’ve been increasing the diversity ever since, planting 200-odd trees by hand and changing the way we manage the grass and riverbanks.

It’s plain to see that the place is heaving with wildlife – kingfishers dart along the river, barn owls are nesting in the owl box, and all manner of insects and small mammals live in the hummocky, species-rich meadows.

The chances are it’s also heaving with sequestered carbon, but I’ve never actually tried to quantify how much. I have excuses for that, too: soil-carbon dynamics are notoriously tricky (and the soil is where most of the carbon is stored); the scale is small; it’s a flood plain so that complicates things; there’s too much variability to calculate a reliable average for the biomass; and . . . and . . . well, I’m not a carbon scientist. But even if it were sequestering enough to compensate for my carbon-heavy Western millennial lifestyle, I’m not sure my flight-taking would be excusable in the eyes of future generations.

That awkward feeling when your actions don’t agree with your ethics is an increasingly familiar one, given that it’s now almost impossible to scroll through a newsfeed without having your conscience pricked. Barely 24 hours goes by without some kind of climate or biodiversity crisis-related headline: extreme heatwaves, extreme hailstorms, extreme glacial melting . . .

Two articles in particular stood out for me in the last while for their utter bleakness. One told how climate crisis disasters are now happening somewhere around the world at a rate of one per week, causing death, displacement and suffering; the other predicted a “climate apartheid”, in which not only basic needs like water, food and housing are undermined, but democracy and the rule of law as well.

If someone with an environmental science degree can be capable of such outstanding cognitive dissonance, it’s hard to see how anyone else can be expected to alter their lifestyles to the extent that’s needed to keep us below 1.5 degrees. Every drop of individual action is important, of course, and any suggestion that it isn’t pushes out hope and ushers in cynicism and apathy.

But, for the vast majority of us, it simply isn’t possible to live a truly environmentally conscious life in an economy that was designed to be environmentally unconscious. As the common rallying cry at environmental protests goes: “Systems change not climate change!”

The people in charge of the systems have sleepwalked through the last 50 years of climate science, and are only now starting to wake up to the consequences of all that lost time. The Irish Government’s recent Climate Action Plan has been discussed at length in these pages, where it was met with a mix of applause for its ambition and caution for our expectations in terms of its delivery.

That caution gave way to downright fury this week with the news that the Climate Emergency Measures Bill was to be starved into submission with the help of an arcane political instrument, the “money message”. Activists bravely spoke out at an event attended by the Minister for Climate Action, Richard Bruton, glued themselves to the doors of the Department of Communications, Climate Action and the Environment, and rallied at the gates of Leinster House with placards and megaphones to protest at the cognitive dissonance of a Government that says one thing and does the opposite.

Now that the Dáil has risen for the summer holidays, there’s a good chance that our politicians are sitting alongside the rest of us in airport lounges, waiting for flights to whisk them off to guaranteed sunshine. I wonder what they’re thinking about.

Hannah Hamilton is a sustainability consultant specialising in biodiversity, conservation and environmental communications@theriverfield