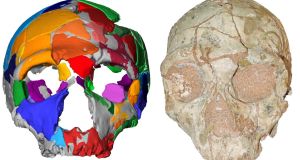 A reconstruction and computer model of part of a skull discovered in a Greek cave, Apidima 1. Photograph: AFP Photo/Eberhard Karls of Tübingen/Katerina Harvati/AFP/Getty Images

Modern humans reached Europe far earlier than suspected, palaeontologists have said, after identifying a 210,000-year-old cranium excavated in Greece as Homo sapiens rather than Neanderthal. Until now there has been no solid evidence for the existence of modern humans in Europe before 60,000 years ago.

An international team led by Katerina Harvati of the University of Tübingen in Germany used a range of techniques to study and date the cranium (the back and top of the skull). The fossil had been discovered in the 1970s in a remote Apidima Cave on the southern Peloponnese coast but was not previously analysed with modern scientific methods.

The findings, published in Nature, add powerful support to the emerging view that ancient hominin populations were far more mobile than scientists had appreciated until recently, with ebbs and flows of different groups between and across continents. A study released 18 months ago dated Homo sapiens jawbones from Misliya Cave in Israel to between 194,000 and 177,000 years old.

“This evidence from Apidima, along with other discoveries, demonstrates that, on more than one occasion, modern humans kept pushing north and westwards from Africa and the Levant into Europe,” commented Eric Delson of the American Museum of Natural History.

“Rather than a single exit of hominins from Africa to populate Eurasia, there must have been several dispersals, some of which did not result in permanent occupations by these hominins and their descendants.”

The researchers analysed two crania discovered in the cave, both damaged and distorted, which they called Apidima 1 and 2. The bones were dated with a technique called uranium series determination and scanned through computed tomography. A 3D virtual reconstruction was then made of each cranium.

The assumption before the project began was that both fossils would turn out to be Neanderthals, who had lived in Europe for hundreds of thousands of years. “But the more we studied Apidima 1, the less it looked like Apidima 2 and Neanderthal fossils,” said Chris Stringer of London’s Natural History Museum, who was part of the team.

The Apidima 1 cranium has a high, rounded shape that is quite different to Neanderthal and other hominin skulls. “It looked like Homo sapiens fossils from the last 100,000 years,” Prof Stringer added. “Now we know from further dating that this modern human fossil is actually older [/210,000 years] than the Neanderthal one [170,000 years] from the same site.”

A likely interpretation is that an early Homo sapiens group moved north from Africa, where the species is believed to have originated more than 300,000 years ago, along the east coast of the Mediterranean and into south-east Europe.

“We think that these early Homo sapiens arrivals died out and were replaced by Neanderthals,” said Prof Harvati of Tübingen. Whether Europe’s first modern human inhabitants succumbed to adverse environmental conditions, hostile attack by Neanderthals or both is impossible to tell.

The opposite process occurred more than 100,000 years later, when modern humans moved north-westwards in larger numbers from Africa through Europe. By 35,000 years ago the last Neanderthals in Iberia had died out, leaving Homo sapiens as the last hominin species on the planet.

Palaeontologists are keen to build on the Apidima findings by searching for more hominin remains at the site, though fieldwork is difficult because access to the cave requires a hazardous landing from the sea.

The researchers will also try to obtain any surviving traces of DNA or protein from the bones to carry out molecular analysis, which would establish more closely their genetic relationships with other ancient hominins. – Copyright The Financial Times Limited 2019