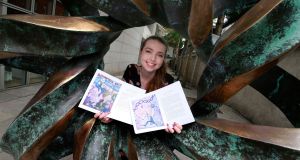 A story for young people about famous Irish scientists, complete with superb portraits, has won the Mary Mulvihill Award for 2019 – the science media competition for third-level students

Laura Katharine Finnegan, a PhD student in Trinity College, has won the overall award in the competition which commemorates the legacy of science journalist and author Mary Mulvihill who died in 2015.

Ann O’Dea, founder of Inspirefest and co-founder and chief executive of Silicon Republic, presented the award and a cash prize of €2,000 at a ceremony at the Science Gallery in Dublin on Thursday.

This year’s competition invited entries on the theme of “Science for the love of it”. Entrants were encouraged to submit work in any format that explored the personal motivations and passions of scientists.

As a writer and broadcaster, Mulvihill, who contributed regularly to The Irish Times, was motivated by her love of science, and often chose to feature scientists who showed passion for their work.

Laura Finnegan’s entry was a unanimous winner; the judges described it as “a beautiful and engaging piece, with a very high quality of both narration and illustration”.

It is, effectively, “a sampler” for an illustrated children’s book profiling notable Irish scientists (including Mary Mulvihill herself and the eminent astrophysicist Dame Jocelyn Bell Burnell, who presented the 2018 ward). Her entry reflected the pleasure in storytelling and skill in imparting information that marked Mary’s work, they noted.

“Mary would have been delighted with this joyful and creative entry and with its target audience,” said Anne Mulvihill, her sister and a member of the judging panel.

Emily Sheridan’s entry, entitled “A Tale of a Life Lived for Science from an Unlikely Narrator” comprised an account of her own journey in science and her parallel journey in learning how to cope with mental health challenges that developed during her teenage years.

The judges described the piece as “a very readable, engaging and honest account of her personal motivations and struggles with science and how it has shaped her life”.

Now in its third year, the competition drew a record number of entries in a highly diverse range of media formats.

Dubliner Laura Finnegan is an Irish Research Council Government of Ireland postgraduate scholar at the Smurfit Institute of Genetics in TCD. Her research, under the supervision of Prof Jane Farrar, explores the use of gene therapy to treat inherited retinal degenerative conditions, to halt or prevent loss of vision.

She is also a tutor with AccessEd, a voluntary programme for second-level students that promotes fair access to university, and has extensive experience as an illustrator for TCD’s student publication University Times. She has a BA in genetics from TCD.

The other judges for the 2019 award were Ellen Byrne, creative director and founder of the Festival of Curiosity; Karlin Lillington, Irish Times tech journalist and columnist; and Nigel Monaghan, keeper of National Museum of Ireland - Natural History.