Learning maths without even trying

At Explorium, Dublin’s marvellous sports and science centre, children can’t avoid learning – try as they might 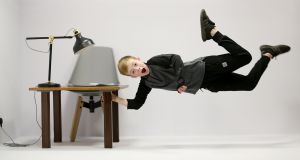 Children have an almost limitless capacity to absorb knowledge if it is presented in an appealing and entertaining manner. Mathematics can be daunting, but it is possible to convey key ideas visually so that they are instantly accessible. Visiting Explorium recently, I saw such a visual display demonstrating the theorem of Pythagoras, which, according to Jacob Bronowski, “remains the most important single theorem in the whole of mathematics”.

I was shown the Pythagoras demonstration by Mark Langtry, head of science and sport at Explorium, Dublin’s marvellous sport and science centre in Sandyford. Mark, a footballer and presenter of kid’s TV science show Let’s Find Out, has a degree in theoretical physics from University College Dublin. He also has boundless enthusiasm for the science centre, and a capacity to explain complicated phenomena in a clear and simple way.

The demonstration has a frame of two perspex plates with coloured fluid between them and a geometric diagram on the front. The diagram, familiarly called “Pythagoras’ pants”, has a right-angled triangle with three squares on its sides. As the frame is rotated, the fluid flows from the two smaller squares to the larger one, just filling it. There are literally hundreds of geometric proofs of the theorem, but this simple physical demonstration shoots the key result into our minds on a high-speed channel.

Explorium has hands-on exhibits covering aeronautics, anatomy, biology, climate, energy and sports science; and much, much more including, of course, mathematics. There is an elliptic billiard table, on which, to Mark’s surprise, I revealed a mis-spent youth by potting the ball easily. Another demo shows how a bike with square wheels can run smoothly on an appropriately bumpy track.

Children can have a bubble race, where huge bubbles float upwards through tubes at different speeds in fluids of varying viscosity. They might wonder why bigger bubbles catch up on smaller ones, and why the image behind a bubble is true while left and right are flipped in the image through the containing tube. Their imaginations are sure to be piqued. They can fire vortex rings from a large cannon, or have a lie-down on a bed of nails without harm.

In an AR (augmented reality) sandbox, the illumination colours the sand at different heights in different shades, conveying the idea of a contour map. By shuffling the sand around, children can move mountains, make rivers and lakes and cause a deluge to pour down the slopes and into the sea. This exposes them to many critical issues in hydrology and cartography in a delightful way. They will not be able to avoid learning, try as they may.

Pressing a button on a tornado machine causes the air to spin rapidly in a vortex. Pressing another releases a visible vapour – colloquially called fog juice – which shows the exciting structure of a tornado. In the nearby “lightning room”, shocking bolts of lightning, generated by a Tesla coil, flash before us, accompanied by thunderous music. We learn that light travels in a straight line, but the lightning flashes follow wildly circuitous paths, chaotic and constantly changing. Why? Ask the children.

There are bicycles in enormous circular tracks, making it possible to cycle through a dizzying vertical loop. There is a harp without any strings that still produces musical sounds, causing kids (and grown-ups) to wonder how? At a workshop, children can assemble all sorts of mechanical and electrical kits, with the help of enthusiastic staff. If they tire of the exhibits, there are some excellent climbing walls and large artificial caves.

Explorium is described on its website as a world-class experience where science and sport fuse. The idea of using sport, which is loved by almost everyone, to enthuse children about science is effective and inspiring.