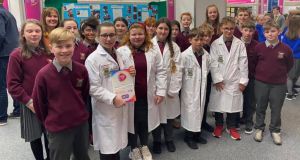 Some of the most intriguing topics for scientific investigation are pursued by the youngest attendees at the BT Young Scientist & Technology Exhibition: Which cup keeps my teacher’s coffee warmer for longer? Which fruit is the best battery source? What are the best natural ways to beat bad breath?

The researchers involved are all in primary school, and hundreds of them participate in the Primary Science Fair, which coincides with the BTYSTE. Its purpose is to foster an interest in science in a non-competitive environment.

The coffee investigation was pursued by fifth class pupils from Knockrooskey National School outside Westport, Co Mayo, who left home at 5.15am on Thursday with their teacher Laura Dillon to travel by bus to Dublin’s RDS and display their research. The idea emerged from observing Ms Dillon’s obvious love of coffee in the course of their day, Katelyn Moran explained.

They decided to broaden the study to evaluate all drinks containers being brought into the classroom and rate sustainability in the interests of avoiding plastic and single-use cups because “366 plastic coffee cups are disposed of every minute in Ireland, ” she added.

Her classmate Oisín Wallace said they believed a “cool-looking flask” would perform best, but an unglamorous soup flask was the winner, reducing from 97 to 47 degrees over six hours. “Ms Dillon’s cup came in third place in terms of heat efficiency.”

Pupils from Brannoxtown Community National School in Co Kildare assessed an array of spices (including cinnamon, ginger and cumin) and natural juices (tomato and lemon) in countering bad breath. With the help of Teagasc, they learned how to grow bacterial cultures from saliva in Petri dishes, and then evaluate the impact of their alternative mouthwashes, said Melissa Griffin.

While the work was interesting, and it was exciting seeing the cultures grow, he said he was looking forward to working on technology and robotics when he goes to secondary school.

The brief in the “smelly grass” project conducted by sixth class pupils at Timoleague National School, Co Cork, was to identify which fertilisers worked best in garden and in a farm setting. Success was measured in the density/sweetness of resulting grass, according to Katie Sweeney.

Classmate Amy Deasy said horse manure did best in a garden setting, while organic tomato feed did the business on the farm. They converted the grass to dry matter before assessing its quality with a small digital device.

They decided to do the project to assist farmers, said Sarah Murphy. They were conscious farmers were getting a bad time, when the reality was they were doing their best to keep carbon emissions down and to ensure fertilisers they use did not run off land into waterways, she added.