Young scientists explore eco-anxiety and how to deal with it 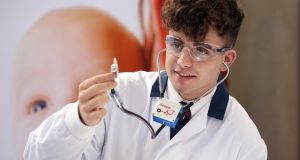 The stethoscope, an essential medical device to assess breathing and heartbeat, was developed in the 19th century and has changed remarkably little since.

Oisín O’Sullivan, a fifth-year student from Desmond College in Newcastle West, Co Limerick, who has always been fascinated by medicine and technology, has produced an enhancement which he believes significantly improves its functionality.

The product of 18 months’ intensive work, his iScope was on show at the BT Young Scientist & Technology Exhibition in the RDS, Dublin. It is an enhanced digital stethoscope, facilitating connection to the internet and generating transmittable digital recordings.

There are some versions available using digital devices to simply amplify sound, he said, but his device adds much more. It records sounds, removes background noise, allows the signal to be sent to another location via an app and it generates a distinctive image.

The standard stethoscope is always limited to the expertise of the user, O’Sullivan said, whereas the iScope enables quicker diagnosis and a second opinion to be obtained if necessary. It was developed after extensive discussion with doctors including local GPs.

Its effectiveness is illustrated, he suggested, in comparing heartbeat sounds before and after a stent operation to remove blockages in blood vessels near the heart. “It’s also very useful if doctors or paramedics are unsure. They can send recordings on for a second opinion.”

Another device with immense potential in a social setting is a wristband to help students with autism alert their teacher in a discreet way when they feel overwhelmed. It has been developed by Hugh Murtagh from Coláiste Mhuire in Co Westmeath.

“I have autism. I know how hard it is to concentrate when I feel overwhelmed in the classroom,” said Murtagh, explaining that once the student presses the button in a small minicomputer known as a Raspberry Pi, the teacher is alerted via email. They can then find a way to help the student with autism to become calm, by for instance asking them to deliver something to another classroom.

The device was tested successfully with the help of Murtagh’s computer science teacher Eva Acton before Christmas. Murtagh said his first prototype was too large, so he was going “to make it more wearable and discreet”.

This year’s BTYSTE is notable not only for the number of projects on climate change, but for those specifically on eco-anxiety and the impact that worrying about the fate of the planet has on mental wellbeing.

Una Rainsford and Rachel Murtagh of Coláiste Choilm in Ballinchollig, Co Cork, compared attitudes between younger and older people and were surprised by the findings. Their survey of 440 people showed all age groups are anxious about climate disruption but older people believe they can do something about it.

Those aged under 19 did not believe their actions could make a difference with more than 40 per cent saying, “I do my part to help the climate but I don’t think it has any impact”.

Half of those aged over 19 believe their efforts can make a difference, while they were most concerned about the impact of climate-related extreme weather. “Younger people were more worried about their future,” Murtagh explained.

They would like to continue their research by measuring associated stress levels, including “how the body reacts, rather the mind, and to compare the response in males and females”, Rainsford added.

Transition-year students Aoife Walsh, Meadhbh Hurley and Rachel Henderson of Kinsale Community College, Co Cork, evaluated climate education messages targeted at young people, and the extent to which they contributed to “loss of control or eco-anxiety”.

Having surveyed more than 300 people, they went back to them to see how they had responded to the messaging, notably if it had translated into climate action. Not only were personal messages far more effective in prompting action, they reduced anxiety by 75 per cent.