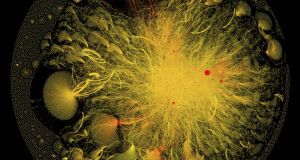 The sole winning Irish entry to the Wellcome Image Awards for 2017. Over an eight-week period, 92,915 tweets were collected to study the communication of #breastcancer. This graph shows how Twitter users, each represented by a dot called a node, are connected through their retweeting and sharing of this hashtag. Computer analysis has been used to convert this 3D data into a 2D pattern. Credit: Eric Clarke, Richard Arnett, Jane Burns, Royal College of Surgeons in Ireland. 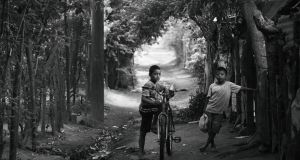 In Chichigalpa, Nicaragua, chronic kidney disease of non-traditional causes (CKDnT) affects more than half of the adult population. CKDnT is associated with heavy labour in hot temperatures, and affects many agricultural workers. These boys have lost two cousins to CKDnT, both men who worked as cutters in sugarcane fields. Credit: Joshua Mcdonald 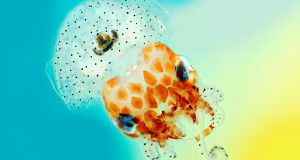 Hawaiian bobtail squid live in the ocean and are nocturnal creatures, meaning they are only active at night. They allow a species of glow-in-the-dark bacteria to live in their body. The squid are able to control the amount of light that shines from the bacteria, matching it to the moonlight above. This means they are invisible to any predators below on the ocean floor. Credit: Mark R Smith/Macroscopic Solutions

A graphical interpretation of Twitter posts about breast cancer is among the 22 finalists in the 2017 Wellcome Image Awards.

The graphic visualisation was created by an Irish academic team using the contents of 92,915 tweets containing the term #breastcancer which were sent over an eight-week period.

Eric Clarke, Richard Arnett and Jane Burns of the Royal College of Surgeons in Ireland developed the work, which used methods that make complex data more accessible and understandable.

The three were “very honoured” to be selected as one of the winners of the Wellcome Image Awards for 2017, Mr Clarke said.

Dots in the graphic represent Twitter users, and larger connecting lines between them show how often a post was shared. The very large nodes show trending data, with one tweet having been retweeted thousands of times. 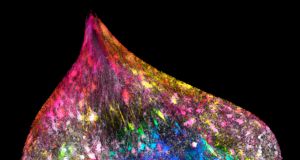 Images from the world of science

The final 22 winning entries for the awards were selected from thousands of submissions to the Wellcome Trust for its annual international competition to highlight striking images from the world of science.

The images go on public display at the Science Gallery at Trinity College Dublin on Tuesday morning and will also be shown at 11 other locations, including W5 in Belfast and venues in Britain, South Africa and Russia.

One of the selected images displays the blood vessels inside an African grey parrot, while another shows the growing human spinal cord. Another is a close-up of a mouse retina.

The Wellcome Image Awards open up a world of science that often remains hidden to the naked eye, according to BBC medical correspondent Fergus Walsh, a member of the judging panel.

The “spectacular array” of images would captivate and inspire the public, he said.

This is the 20th year of the awards and the second year the Science Gallery hosted an exhibition of the winning entries.

A gallery of the winning images can be seen on irishtimes.com.