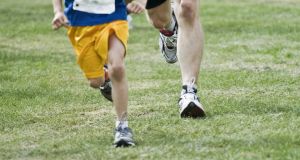 Scoil Íde in Corbally, Co Limerick, undertook a project that looked at whether having an upcoming event, such as a triathlon, leads to increased participation in fitness activities and increased fitness levels. Photograph: iStock

Does it help your fitness to have an event as a goal when you are training? Can cartoons and comics help children to achieve better results in tests? How would you even find out?

A competition called “Start” is encouraging primary school students to come up with interesting questions and to design and run trials to answer them in a scientific way.

One of the winning entries last year came from Scoil Íde in Corbally, Co Limerick, for a project that looked at whether having an upcoming event, such as a triathlon, leads to increased participation in fitness activities and increased fitness levels.

“It might seem like an obvious question but the whole idea is that they used the scientific rigour of the trial process to look at it,” says Galvin.

The “control group” was made up of 5th-class students who were encouraged to improve their fitness but who had no particular event or goal in mind. The results suggested that while all groups made improvements in fitness, these were most pronounced in the classes who were working towards events.

For another winning entry, students at Cork Educate Together National School tackled the question of whether visual aids, cartoons and comics might help children to do better in tests.

They recruited first- and second-class students to take part and gave the control group tests with text only, while the test group got one test with text only and the other with images and cartoons.

The results? “We found that the test group’s scores improved drastically (from 58 per cent to 83 per cent) when they were presented with cartoons and visual learning aids, compared to their previous test where they had only plain text to refer to,” stated the presentation that the students prepared for the competition.

The Health Research Board – Trials Methodology Research Network provides information on its website about how to take part in Start, and experts are on hand to answer queries. The winners will be announced at an event for shortlisted entrants in NUI Galway in May, and Galvin hopes that the competition will build awareness among students and their teachers and parents about how clinical trials are designed and run.

“It is one of the only initiatives out there that is teaching children about randomised trials,” she says. “We need more people to participate in trials to improve healthcare, so there is that big important picture here, and it comes down to kids having fun and they take the message home.”

The closing date for entries is April 12th. For more information about taking part and registering an entry, see hrb-tmrn.ie/start-competition