Fossil discovery may give new start date to life on Earth

Researchers must now prove that the fossils, found in Canada, are biological in origin 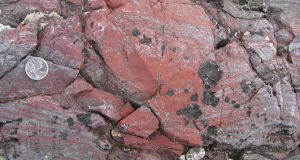 The rock structure that held the fossils at the Nuvvuagittuq Supracrustal Belt in Canada. Photograph: Dominic Papineau

That most rare and unique thing called life took hold on Earth far earlier than scientists thought, a new fossil discovery has shown. An international team has located fossils of micro-organisms dating back at least 3,770 million years and possibly 4,300 million years.

The find, if proven to be a marker for life, pushes back the clock another 300 million years for the earliest signs of life on our planet. The tiny fossils, measuring no more than half the width of a human hair and a millimetre long, were dug out of rock in Canada.

“This is pretty exciting,” said Dr Maria McNamara, a senior lecturer in palaeontology at University College Cork. She said, however, that it may be a challenge proving the origins of the fossils were biological.

The iron-eating fossil bacteria were extracted from rocks recovered from the Nuvvuagittuq Supracrustal Belt in Quebec. This is some of the earliest sedimentary rock yet discovered on Earth. It is also a new area for such ancient fossils to appear, Dr McNamara said.

The researchers, writing in the journal Nature on Wednesday, believe the rocks likely formed part of a hydrothermal vent system on the sea floor.

These vents occur where superheated sea water rushes out of cracks in the earth’s crust. There are hydrothermal vents found around the world, including at the mid-Atlantic rift. They are rich in minerals and today the vents support a unique mix of organisms including crabs, tube worms, snails and other creatures.

The researchers, led by University College London and including scientists from Norway, the US, Australia, Canada and the UK, believe the rock belt in Canada originally was part of a thermal vent system.

In this case, the vents were supporting an extremely early bacterial form of life, providing iron minerals for food and heat to keep the bacteria alive on the sea floor.

The earth formed 4.54 billion years ago and would have represented an extremely hostile environment.

The research shows, however, that life got a very early grip on the planet about a half a billion years afterwards and held on tight once it took hold. Now the challenge for the researchers is to prove the structures were life and not just inorganic chemistry.

“It is a new form, but proving they are life is going to be very difficult,” said Dr McNamara, who is based in the school of biological., earth and environmental sciences.

“The further you go back in time the harder it is to prove you are dealing with a biological structure. They can be very controversial,” she added.