Roadkill: Why splatter matters to science

Why did the hedgehog cross the road? To help with scientific research, of course 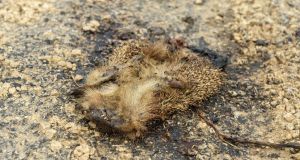 Tired out: This unfortunate hedgehog can be a source of valuable scientific information.

Why did the hedgehog cross the road? To help with scientific research, of course. When that spiky little critter gets squashed by a car or truck before it reaches the other side, its flattened remains may prove very useful: by providing valuable data about wildlife habitats, helping conserve protected species, and perhaps even providing a source of micro-organisms that can contribute to the development of new drugs.

Anyone who drives will come across roadkill, be it a domestic cat that has used up its nine lives, or a badger on the M7 that should have stayed in its sett. You might even have contributed to roadkill yourself – a recent survey from AA Ireland found that more than one in 10 Irish motorists had hit or killed at least one animal with their car in the past five years.

Rabbits are the biggest casualties, with dogs second and cats third, but anything that lives in the wild is fair game. Everything from squirrels to otters to kestrels to barn owls have met a sticky end on Irish roads.

Coming across roadkill on our travels, we usually keep our eyes fixed straight ahead rather than look at the grisly sight. But some scientists are asking people suppress the gag reflex and take a closer look at what they find stuck to the tarmac. It’s not morbid curiosity: the researchers want more information on the populations and movement of wildlife so they can develop strategies to protect these species.

The 2017 Roadkill Survey is now collecting data on the different species that get killed on our nation’s roads. Researchers at Biology.ie want to find out if certain species are particularly prone to getting run over by cars and trucks, and if roadkills show seasonal or geographic patterns.

They don’t want you ending up as roadkill, so if you spot something while barrelling down the motorway, don’t suddenly slow down or stop, and don’t stroll into the middle of the dual carriageway for a closer look. As long as the animal hasn’t been squashed into a completely unrecognisable pulp, you should be able to identify it easily enough from a safe distance.

After you’ve identified the animal, go to biology.ie and follow the steps for logging the find. You can mark the approximate location on a map or, if you’re the scout leader type, enter the latitude and longitude or the Irish Grid System co-ordinates.

The survey was first commissioned by the National Parks and Wildlife Service to collect movement and population data on “Annex IV” species – those listed under a European Commission directive as of community interest and in need of protection. The data was to be used by the National Roads Authority to help develop strategies for protecting wildlife species, such as building passes for vulnerable animals to safely cross roads.

The financial crash put a big dent in funding, says Paul Whelan of Biology.ie. “But it’s worth keeping the survey going because the data is used in ways people don’t imagine.”

Local county councils, for instance, use the data to learn about animal movements in the locality. Councils can then build raised walkways under country bridges, allowing animals such as otters to move freely along the river without having to cross a main road.

Roadkill data can also tell a lot about the distribution of species around the country, Whelan says. Example: “Pine marten populations were thought to be restricted mostly to the west and midlands,” he says, “but there have been sightings of pine marten roadkill as far south as Valentia, Co Kerry. So the survey has led to the discovery that pine marten distribution is wider than we thought.”

A similar citizen science research project has been under way in Wales for the past few years. Project Splatter, run by the University of Cardiff, examines what impact roads are having on wildlife in the UK and ways of reducing animal deaths.

You don’t have to pinpoint the exact spot where you found the roadkill,” he adds. “Once you’re within a couple of miles of the area, that will be enough. Animals move around within a few miles’ radius of their habitat, so once we know the general area we can use the data.”

Biology.ie has its fair share of dedicated “roadkill warriors” meticulously logging their findings, but Whelan notes that some counties are less forthcoming than others with data.

“For some reason we don’t get much data from Wexford or Limerick. Maybe animals don’t get killed on the roads there.”

PANEL: A CURE ON OUR ROADS
Roadkill can be a rich source of data about wildlife as well as provide information about species that lived a long time ago. Palaeontologists in Virginia, for instance, collect frogs, salamanders and lizards that have been killed on the roads and use their skeletons to help identify fossils they have found.

By comparing a bone fragment from a long-extinct phytosaur, say, with the bones of its modern-day lizard descendants, scientists can build up a more accurate picture of the fossil they are studying.

That fly-covered road pizza can also provide the means to tackle disease. Scientists at the University of Oklahoma have been taking swabs from roadkill, such as armadillos, deer, opossums, racoons and skunks. They are looking for are microbiomes, a unique set of micro-organisms that could be used to develop new drugs and treatments.