'Exercise alone has little effect on weight. You must reduce your food intake' 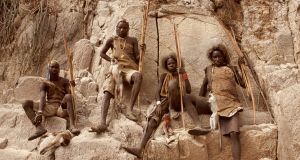 Tanzania, Africa: life for these Hadza hunter-gatherers can be very physically demanding

We assume that physically active people burn up more calories than “couch potatoes” but, very surprisingly, studies have shown that daily human energy expenditure is largely the same regardless of level of activity. The corollary of this is that strenuous exercise alone will have little effect on your weight. You must reduce your intake of food to get significant results. Herman Pontzer describes how human energy expenditure is tightly constrained in a wonderful article in the February issue of Scientific American and speculates on how the human energy engine evolved to allow humans to develop our distinctive traits.

Life for the Hadza is very physically demanding. The women spend their days foraging for edible wild plants and the men range far and wide hunting game with bows and arrows they make themselves. These activities call for intelligence as well as stamina. Hadza men must plan how to stalk game that can run much faster than they can. And the women rely on a fantastic knowledge of local plants, allowing them to bring food home every day – game hunting alone will not feed the tribe. This sophisticated co-operation and complementation is what makes humans unique.

You would naturally expect that the Hadza would burn more calories daily than people living a European city lifestyle. In fact, it is commonly thought that a prominent driver of current obesity in the developed world is a reduction in daily energy expenditure compared to our much-more-active ancestors. However, Pontzer has shown that, amazingly, the Hadza eat and burn the same number of calories a day as adults in the US and Europe: 2,600 calories for men and 1,900 calories for women on average. Nonhuman primates also have a fixed rate of energy expenditure – captive primates burn the same number of calories a day as those in the wild, despite the difference in physical activity.

Other studies have shown that, although people who are moderately active burn 200 calories a day more than couch potatoes, people with the most intensely active lives burn no more calories a day than those who are moderately active. These results imply that our current western epidemic of obesity is caused by overeating, not by inactivity and advocating greater levels of activity to slim down the obese is barking up the wrong tree. The only way to significantly reduce weight is to cut back on food-calorie intake.

However, Pontzer is at pains to point out that knowledge of this energy expenditure pattern does not excuse us from taking exercise. Exercise has many well documented health benefits – improving cardiovascular function, immune system and brain function, assisting psychological wellbeing and promoting healthy ageing. The message is exercise to stay healthy and manage your diet to control your weight.

What mechanism explains how the Hadza burn no more calories a day then relatively sedentary people in Europe? The answer is not known for certain but Pontzer speculates that the very active body reduces the energy spent on its multiple unseen housekeeping tasks that keep us alive and make up most of our daily energy budget, thereby making energy available for additional activities. This allows people to spend more energy on physical activity without increasing the total calories expended a day.

Natural selection always chooses the most efficient use of an organism’s energy resources. Humans live longer and can have more and bigger babies than other primates. The human brain, which allows us to analyse, plan and co-operate in a sophisticated fashion, is much larger than the brains of other primates – every fourth breath you take is needed to sustain your brain. Correspondingly, studies show that humans have a faster metabolic rate, burning at least 400 calories a day more than other primates. We need these extra calories to support larger brains, produce more babies and to live longer. The evolution of our increased metabolic rate compared to other primates was essential to our becoming human.

William Reville is an emeritus professor of biochemistry at UCC. http://understandingscience.ucc.ie