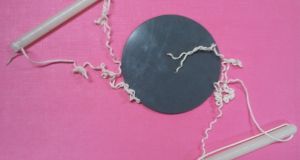 Modern science is big: the gravitational wave detector (Ligo) cost more than a billion dollars, and the large hadron collider (LHC) in Geneva took decades to build and cost almost five billion euros. It may seem that scientific advances require enormous financial investment. So, it is refreshing to read in Nature Biomedical Engineering (Vol 1, Article 9) about the development of an ultra-cheap hand-operated centrifuge that costs only a few cents to manufacture.

The centrifuge was inspired by a simple spinning toy called a whirligig. This consists of a circular disc such as a button, with a loop of twine threaded through it. Some readers may recall making these toys from tin-lids and wool. As the string loop is pulled and relaxed, it induces successive rapid winding and unwinding phases with alternate clockwise and anticlockwise spinning of the disc. What is surprising is that, if the toy is correctly operated, spin-rates of many thousands of revolutions per minute (rpm) can be achieved.

The designers of the centrifuge, from the Department of Bioengineering, Stanford University, call their invention a “paperfuge”, as the disc is made from stiff paper card. Two discs, a loop of string or nylon and two wooden or plastic handles are all that is required to make it.

Commercial centrifuges are heavy and expensive and need electric power. Egg-beaters and salad-spinners have been tried without much success as spin-rates are far below the levels required for practical use. The paperfuge is capable of spinning much more rapidly. In trials, the smallest disc, of radius 5mm, reached peak angular speeds of 125,000 rpm. The disc most suitable for applications, with a 50mm radius, reached more than 20,000 rpm, comparable to commercial centrifuges.

The designers developed a comprehensive mathematical model of the paperfuge to analyse its performance. Newton’s law of motion states that the rate of change of angular momentum is equal to the total torque or turning effect. There are three turning effects, due to the manual input force applied by the operator, the twisted state of the string and the air-drag on the disc. These torques were parameterised, that is, approximated by bulk formulae using measurements from several experiments. Then the theoretical motion of the disc was calculated from the equation of motion. Comparison of theoretical results and experimental data showed that the mathematical model simulated the motion faithfully.

In practical use, small capillaries of whole blood are mounted radially on the paper disk, and the device is spun for a short time.

Blood analysis using conventional centrifuges is impractical in many circumstances, due to high equipment costs or to lack of electric power. The paperfuge is suitable for point-of-care medical diagnostics in under-developed regions as it does not require any electric power. It is hand-powered, and can separate whole blood samples within minutes.

This research is a good example of frugal science. It shows how the complex dynamics of a simple toy can be exploited for valuable global health applications. The elementary design means that mass production is feasible, providing a low-cost solution suitable for medical applications in resource-poor regions.