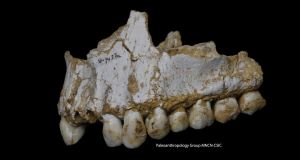 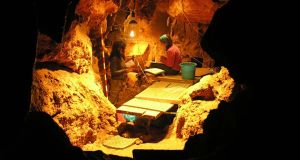 The Tunnel of Bones cave in El Sidrón where 12 Neanderthal specimens dating from 49,000 years ago have been recovered. Photograph: Paleoanthropology Group MNCN-CSIC/Antonio Rosas

A lack of dental care has given researchers an opportunity to see what Neanderthals had for breakfast.

The Australian and UK scientists also discovered at least one Neanderthal that seemed to be taking painkillers for a severe tooth ache.

The research is based on success in extracting DNA from the dental plaque build-up on Neanderthals whose remains were discovered in Belgium and in Spain.

Dental plaque traps micro-organisms that lived in the mouth and also the remains of what they were eating “as well as bits of food stuck in the teeth”, said Dr Laura Weyrich of the University of Adelaide.

The Australian scientists joined with others from the University of Liverpool to extract DNA from dental plaque, revealing what our nearest extinct relative ate and also providing “a unique window into Neanderthal lifestyle”, said Dr Weyrich who is lead author in a report published on Wednesday in the journal Nature.

They recovered plaque from four individuals found at cave sites at Spy in Belgium and El Sidrón in Spain, who lived between 42,000 and 50,000 years ago.

The menu in Belgium included plenty of meat in the form of woolly rhinoceros and wild sheep, with a few mushrooms thrown in for good measure.

The group in Spain were on a completely different tack however, mainly eating vegetarian food with pine nuts, moss, mushrooms and tree bark on their bill of fare.

The most surprising find, however, was one of the El Sidrón group seemed to be self-medicating for pain, the researchers said. One had a dental abscess and also a bad dose of diarrhoea caused by an intestinal parasite “so clearly he was quite sick”, said Prof Alan Cooper of Adelaide’s centre for ancient DNA.

“He was eating poplar, which contains the painkiller salicylic acid – the active ingredient of aspirin – and we could also detect a natural antibiotic mould, penicillium, not seen in the other specimens,” he said.

As part of the project, the team was able to reconstruct the oldest microbial genome yet sequenced, a bug associated with gum disease and dental cavities that continues to affect our branch of the human family today.

The two sets of Neanderthals would have had radically different lifestyles based on what they were eating. The veggies in Spain were more in tune with what chimps and forager ancestors were doing long ago in Africa.

The Belgium pair were more like early hunter-gatherers and so closer to the path that modern humans later pursued.