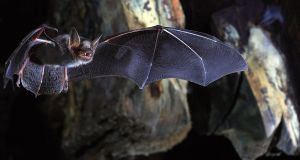 Scientists have identified genes that may give long-lived bat species their extraordinary lifespans and ability to resist cancer compared to other animals. This is an important milestone for researchers around the world working to increase human lifespan while maintaining good health.

It provides critical evidence of how direct intervention in the ageing process itself might help reduce illnesses associated with getting old, and increase lifespan and quality of living.

Bats live way longer than expected, do not get cancer, and defy the conventional belief in nature that if you live fast, you die young.

The findings of an international team of scientists led by researchers at University College Dublin show bats limit the level of DNA damage they experience as they age, increase their levels of DNA repair and removal of cellular damage, which is partially controlled by regulatory genes.

The longest-lived species of bats (known as Myotis) show a unique, age-related gene expression pattern associated with the ability to repair DNA, remove damage while maintaining immunity and the ability to suppress tumours. This is not observed in humans or other mammals and may drive their extended healthspans.

To conduct the study, researchers took a few drops of blood from more than 100 wild bats living in caves in Brittany that they have captured, marked and released since 2010.

To uncover how this “anti-ageing” gene expression pattern is controlled in bats, they sequenced small regulatory genes knows as “microRNAs” and uncovered key genes that may control “the longevity pathway” in the species. Blood samples were flash frozen in liquid nitrogen, and high quality RNA, in effect “the message from expressed genes”, was extracted, sequenced and compared across different aged individuals.

“We deep sequenced about 1.7 trillion base pairs of RNA from 150 blood samples collected from known aged bats to uncover the age-related gene expression changes that may underlie their extended healthspan,” explained Dr Huang Zixia, who is based in UCD and the lead author of their study published in Nature Ecology and Evolution on Monday.

The regulation and interaction of genes associated with DNA repair, removing damage, immunity and tumour suppression “underlies bats’ extraordinary longevity and low cancer incidence,” said Prof Emma Teeling, who has led the research over the past eight years. For example, microRNAs acting as tumour suppressors are “upregulated” in bats with age, while microRNAs promoting cancer are “downregulated”, she added.

Previously, the team showed that in long-lived bats “telomeres”, the protective ends on their chromosomes, did not shorten with age. This is usually a consequence of getting older, and this new study indicates the genes driving this.

This means their work will move “from the wild to the genetics lab” to look at extended healthspan in other animals, with the aim of eventually helping humans to age well, Prof Teeling said.

Her admiration of bats remained undiminished, she said. “They really hold the secrets to a lot of problems, all because they exist in a weird ecological niche.” In addition, they play a critical role in ecosystems that are vital to the Planet, and yet their habitats and insect prey types are being undermined by climate change.

The study was funded by the European Research Council, the Irish Research Council, and UCD Wellcome Trust Institutional Strategic Support Fund, and included scientists and conservation organisations from UCD; Bretagne Vivante in France and the University of Greifswald in Germany.