Weather and ballistics among areas affected by Coriolis effect 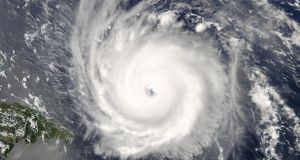 Hurricane Frances displays the Coriolis effect which has a dominant influence on the global circulation of the atmosphere and oceans.

On the rotating Earth, a moving object deviates from a straight line, being deflected to the right in the northern hemisphere and to the left in the southern hemisphere. The deflecting force is named after a 19th century French engineer, Gaspard-Gustave de Coriolis.

Coriolis was interested in the dynamics of machines, such as water mills, with rotating elements. He was not concerned with the turning Earth or the oceans and atmosphere surrounding it. But it is these fluid envelopes of the planet that are most profoundly affected by the Coriolis force.

There are many spurious accounts of the Coriolis effect that obfuscate rather than clarify it. The surest way to understand it is through the mathematical equations. These are not overly complicated, but neither are they trivial. The essential fact is that the Coriolis effect arises because we view motions from a base – the turning Earth – that is itself in motion. While the essential dynamics were revealed by Coriolis, it was many decades before their wider implications were realised.

On an Arctic expedition, Fridtjof Nansen made a discovery that would greatly impact ocean science. He noticed that floating icebergs drift at an angle to the right of the prevailing winds. This was soon explained by a Swedish meteorologist, Walfrid Ekman, who showed how the Coriolis force deflects the motion. He also showed how a similar process acts in the atmosphere.

The Coriolis effect has a dominant influence on the global circulation of the atmosphere and oceans. It shapes the flow of air around hurricanes and depressions. Pressure differences cause the air to accelerate away from high-pressure areas or anticyclones towards lower pressure. The Coriolis force deflects it to the right (in the northern hemisphere) so that the flow is counter-clockwise around depressions. We can see this any day on broadcast weather charts. In the southern latitudes, the direction is reversed and airflow is clockwise around atmospheric depressions.

The Coriolis effect also has more local impacts. Sea breezes that develop on warm afternoons are deflected by the effect, and ocean currents and tides fall under its influence. Thus, the tidal range on the French side of the English Channel is much greater than on its northern side.

There are many other consequences of the Coriolis effect. A golf ball travelling at two metres per second for 10 seconds is deflected to the right by about a centimetre. However, to correct for this, the putter would have to adjust the striking angle by about two arc minutes, a tiny fraction of one degree, which is impracticable. More practicable are the corrections required in the military arena: a missile fired at two kilometres per second at a target 100km distant would veer by about 250m, enough to miss the target and hit a school or hospital.

There is a story of a naval battle in 1914 off the Falkland Islands, where the initial salvos from the Royal Navy dreadnoughts fell 100m to the left of the German ships. It is claimed that corrections designed for the northern hemisphere were made in the southern latitudes of the Falklands, doubling the deflective effect. Whatever the truth of this tale, it is beyond doubt that fire-control corrections are essential for ballistic accuracy.

More spurious is the myth that water goes down the plughole counterclockwise in the northern hemisphere and clockwise in the southern. Simple observation shows this to be false. Another result is the deflection of falling objects to the east. This is a real, but tiny, effect: if Newton really watched an apple falling, he did not comment on its deviation from the vertical.

Peter Lynch is emeritus professor at UCD School of mathematics and statistics. He blogs at thatsmaths.com