The mysterious lifestyle of tiger sharks has been revealed through the use of innovative tracking devices developed by scientists at Trinity College Dublin. Video: Diego Camejo/Trinity College 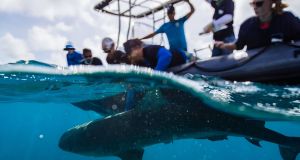 Dr Nicholas Payne atttaches a bio-logging device to a tiger shark in waters off the Bahamas.

The mysterious lifestyle of tiger sharks, who are notoriously difficult to study in their natural environment, has been revealed through the use of innovative tracking devices developed by scientists at Trinity College Dublin.

Working with a US-based NGO, they have returned from the Bahamas having secured a vast amount of new data about the secret lives of the region’s tiger sharks. It has been made possible by using bio-logging devices attached to the fish.

The biological information will help the team assess how the global climate crisis may be impacting these “apex predators”, who are on top of the food chain and have no natural predator.

Tiger sharks are classified as “near threatened” by the International Union for the Conservation of Nature, with commercial and artisanal fishing pressure and infrequent (once every three years) reproduction contributing to this status.

Several countries continue to cull populations of tiger sharks given perceived risks to human swimmers, despite some regions having seen declines in shark abundance of some 75 per cent in recent decades.

These huge up to 5 metres in length animals are found in tropical and sub-tropical oceans worldwide but have always been difficult to study given their aquatic lifestyle.

The scientists involved in the current study got around this issue by using their biologging devices on the sharks - with sensors recording video, body temperature, swimming activity and orientation as the animals went about their normal routine.

By measuring how temperature influences the sharks’ behaviour and swimming performance, the team will be better placed to predict how these animals will respond to future climate change.

Assistant professor in zoology at Trinity’s School of Natural Sciences, Dr Nicholas Payne, said: “We are all really excited by the initial results. These animals can be incredibly hard to study in their natural habitat, and it’s only recently that the technology is becoming available which allows us to make the kinds of observations we need.”

“Unlike us, these sharks don’t have great physiological mechanisms for controlling their body temperature. As a result, if the temperature of their habitat changes, then so does their performance,” he added.

Their new data will help us understand how tiger sharks respond to variation in temperature and that will ultimately allow us to make more accurate forecasts of what will happen to these animals if global temperatures continue to change.”

Beneath The Waves chief executive Dr Austin Gallagher said their research was an important step toward conservation as it indicated where tiger sharks go and what they do. “Apex marine predators like tiger sharks have a critical regulating influence on marine ecosystems, and the more we can learn about their ecology and physiology, the better equipped we’ll be to manage and conserve their populations into the future.”

Meanwhile to celebrate Ireland’s connection to the Atlantic Ocean and its contribution to marine biology research buildings in TCD will “Go Atlantic Blue” over the weekend – along with over 40 other famous buildings and landmarks across Ireland. It also coincides with World Oceans Day on Saturday.

Many of our country’s famous landmarks will light up their buildings blue, while businesses, shops, schools and homes across the country will also “Go Atlantic Blue” on the day. Their participation will highlight the strong connection that people in Ireland have with the Atlantic Ocean “and the multiple ways that it affects and enriches our daily lives”, according to the organisers.