Charting the take-off of air travel

Commemorations have been held in Co Galway to mark the centenary of John Alcock and Arthur Brown’s famous transatlantic flight from Newfoundland to Connemara. Video: Reuters 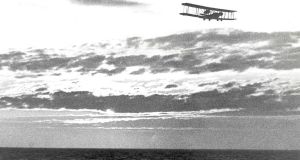 Around 9am on June 15th , 1919, an Australian soldier spending his honeymoon in Clifden looked out the window of his hotel room and saw a plane. Shortly afterwards, two gentlemen surprised the signal operator at Marconi Station (also in Clifden) when they landed that plane next to the station and announced that they had just arrived from Newfoundland.

The two gentlemen turned out to be Captain John (‘Jack’) Alcock and his navigator Arthur (‘Teddie’) Brown who had won the race to be first to cross the Atlantic Ocean flying a “heavier than air” machine. After getting an autograph, the operator complied with the aviators’ requests for a bath and a shave and by noon the news of the flight had attracted hundreds of locals to the scene. By the next day, newspaper columns had filled with “the thrilling story” of a “terrible flight” that had bridged the Atlantic in just over 16 hours.

The period between the wars was an age of many first flights, as war-trained aviators sought new outlets for their skills. One of the earliest commercial flights arrived in Dublin about 10 days after Alcock and Brown’s flight. Mr Harry Gordon Selfridge travelled to visit Brown Thomas and Co, which his company (Selfridges) had recently purchased. Selfridge enthused about his 3½ hour time-saving flight to Dublin and predicted that soon “it should not be a difficult thing to live in Dublin and do business in London if one wanted to”.

“I think that there is something in it,” he remarked. There was indeed “something in it” though it took much longer to come to pass than either Selfridge or Alcock thought.

Born in 1892, Alcock had come to flying through training as a mechanic. He became involved in the repair of aero engines in 1911 and learned to fly at age 20. His first ‘job’ as a pilot was for an automobile company for whom he flew races, including a 1914 flight between London and Manchester. During the war, he trained pilots in England before being deployed to the Mediterranean. There, he was captured by the Turks after engine failure forced him to ditch his plane into the sea. He was released in 1918 and soon had teamed up with the Vickers company to enter the transatlantic flight competition sponsored by the Daily Mail.

Brown soon joined the team as navigator. Brown had trained as an electrical engineer but he had also been involved in flight during the war and had obtained his pilot’s licence afterwards. He too had been a prisoner of war, shot down over France in 1915 and captured by the Germans. He later worked at producing aircraft for the war effort.

The Vickers Vimy aircraft that Alcock and Brown flew had been designed as a bomber. It was powered by two Rolls-Royce Eagle engines. Rolls-Royce had been designing aero engines throughout the war and had also supplied engines for a further, unsuccessful, transatlantic crossing. (This flight had left a few weeks before Alcock and Brown. The aviators were rescued by a ship about 500 miles before Ireland when they were forced to ditch into the sea.)

Aero engines at the time were variations on an internal combustion engine (the system used to power automobiles) and were designed for short flights reflecting their use as bombers during the war. A Rolls-Royce engineer (Eric Platford) and a mechanic (Bob Lyons) travelled to Newfoundland with the aviators and modified the engine in order to suit the longer distance required. The plane had to carry extra fuel to enable the long flying time. The constant damp and cold conditions of the flight had to be accounted for in terms of choice of engine oil.

Rolls-Royce aero engines had developed a reputation for reliability during the war, essential for a nonstop flight with no place to land. The Eagle was also very powerful for the time, allowing the plane to travel at a maximum speed of about 120 miles per hour (a modern airplane cruises at about four times that speed).

The choice of a dual-engine aircraft did not reduce the risks associated with a long flight as the plane could not fly with a single engine. The transatlantic flight presented a huge number of technological challenges aside from engine reliability. According to Peter Collins, director of the Rolls-Royce Heritage Trust, early aviators were essentially using navigation tools adapted from ships. It was much easier to navigate in daylight over land than in the dark over sea. The Atlantic also presented challenging weather conditions for plane and passengers.

Alcock and Brown had prepared for the cold with electrically-heated suits, but they had to remove ice from parts of the plane and engines and all of their communications equipment was quickly rendered useless after take-off. Landing was dangerous and their sudden landing in the bog (which they had not been able to recognise as bog from the sky) might have been a disastrous end to a daring feat. Alcock died later that same year from injuries he received in a bad landing outside of Paris.

The developments in aviation over the 20th century must have been astonishing for ordinary citizens. As Collins suggested to me, a person born in 1900 was born into a world with no “heavier than air” flying machines but by the time they reached adulthood people were flying across the largest oceans. By the time they reached retirement age, they might have been able to afford a flight on a commercial airliner, powered by the new jet engines.

The competitive, dare-devil atmosphere of early aviation has perhaps now moved to the realm of space travel. When we think of flying we think primarily of safety and increasingly of sustainability. The next frontier in flying is not a continent or an ocean but a fast, fully-electrical engine. In 2020, Rolls-Royce is hoping to demonstrate the world’s fastest electrical plane. Perhaps by the end of our lifetimes we’ll be crossing the Atlantic in one.