What’s inside a black hole? We’re looking into it 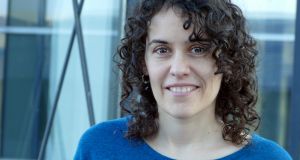 Ana Alonso-Serrano: ‘We need to push more for changing the image of a physicist as a man’

Physicist Ana Alonso-Serrano has spent much of her career thinking about what’s inside a black hole, an object which the world only caught a first glimpse of last April.

Predicted by Einstein’s theory of general relativity, as one solution to his field equations, black holes are ultra-compact objects which exist as a final stage of some giant stars as they die.

Inside a black hole, matter is so dense that the object’s gravitational field prevents light from escaping, while space and time itself are drastically distorted.

Originally from Madrid, and now based in Berlin, Alonso-Serrano has also worked on wormholes and the concept of the multiverse, the idea that we exist in just one of many universes.

At her workplace at the Max Planck Institute for Gravitational Physics (Albert Einstein Institute) in Potsdam, Germany, she spoke about the nature of her work, the difficulties of life as a researcher, and what it’s like being a woman in the very male-dominated arena of physics.

How did you begin your career in theoretical physics?

I started my career by studying wormholes while working towards my Masters degree. A wormhole is a shortcut between two parts of space-time, which is something we can show to exist mathematically. But for these to occur in reality we need to postulate the existence of a special kind of stuff called “exotic matter”, which we have yet to observe.

My work looked at the kinds of wormholes which could exist, their possible geometries, and also how they might leave some signature or imprint on the Universe which might be possible to detect.

Wormholes make an appearance in the great book and movie Contact, written by Carl Sagan and later starring Jodie Foster. Kip Thorne, one of the winners of the 2017 Nobel Prize in Physics, helped Sagan come up with the idea of a type of wormhole that would act as a gateway through which a protagonist could travel through time, or to another place in the Universe.

What is black hole radiation and evaporation?

When black holes were originally proposed by general relativity, they were expected to be at a temperature of absolute zero. But in the 1970s Stephen Hawking postulated that there are some quantum properties on the event horizon of a black hole which are related to temperature.

But for an entire black hole to evaporate, in most cases this would take longer than the length of time the Universe has already existed. In any case, we expect that black holes are growing if they are being fed at a faster rate than they are evaporating.

What is the black hole information paradox? And how have you worked to resolve it?

Because of the nature of black holes, when something falls in, that thing disappears forever. Also, when we observe a black hole we have no information about what is in it. This is different from other objects in the Universe, like planets and stars, where we can usually gain some information about them. So Hawking radiation and the implied evaporation poses the following problem.

Over the past few years myself and my colleagues have been working on this problem, and we have made a proposal. We propose a new way in which information can leak out along with the Hawking radiation. We’ve done this by considering a black hole not as a closed box, which was usually how it was treated, but as an entity open to interaction with the rest of the Universe, which is in fact how it works in reality. We have not yet solved the information paradox, but simply shown a new way to work on the problem. It is just one approach.

What work have you done on the idea of the multiverse and how could we ever detect its existence?

I’ve previously worked on ideas around multiverse theory, the idea which suggests there are many different universes out there. My work looked at the possible entanglement between different universes and how this could affect the parameters in one universe.

Now I’m working on the philosophy around the idea; if we really need it, whether it’s addressing a real question or not, or if it’s nonsense! So, we have tried to define a theory of the multiverse which is falsifiable. We’ve looked at what kind of relationships could exist between universes to see if these could make some modification or mark in our own Universe, which we could then detect.

In particular we think about the potential effects of the interaction between universes on the Cosmic Microwave Background, which is the electromagnetic radiation which filled the Universe at an early stage, of which we have a clear image.

In general, our current cosmological predictions fit the Cosmic Microwave Background quite well, but not perfectly. For example, there are some areas which appear as “cold voids” which we cannot explain. These are regions of interest for multiverse theorists because they may be locations of interaction between universes. My own work on the matter involves seeking out the potential observational signatures of wormholes, which might provide a connection to another universe.

Do you find it hard to work as a researcher because you have to move around so much?

It’s tough moving around all the time. After finishing my PhD research in Madrid, I took a postdoc position in Wellington, New Zealand, then I moved on to Prague, and now I’m 1½ years here at the Albert Einstein Institute, living in Berlin.

I think its actually very interesting to move country and work with different groups, but obviously you’re living out of a suitcase and you never really spend enough time to make a life in one place. Then there’s the risk of maybe having to leave academia because it’s so competitive. Now, that may not be a problem aged 30 or so, but one can imagine that later, as life goes by, it becomes more difficult to change career. The main problem is to find a permanent position, as you can’t live forever as a postdoc. So this is why a lot of really talented people have to leave the community.

How hard is it to be a woman working in physics, which traditionally has one of the lowest female cohorts in all of science?

Life at the institutes tends to be good, in my case anyway. But sometimes I feel that, while attending conferences, women are judged differently. Generally I think the ratio of men to women at the conferences I attend is around 10 to one. Sometimes I hear men suggesting that because I am a woman I will be successful in academia due to some notion that now the positions are biased towards women, and that we enter by quotas.

But this is not true. Successful funding applications still depends on the quality of your research papers and research profile. So there’s still a ways to go, I think, in changing the perception of women in physics and science as a whole. I also think its important to have female role models in science and society, and we need to push more for changing the image of a physicist as a man.

Conor Purcell writes on science, nature and philosophy, and has a PhD in Earth Science.He is journalist in residence at the Max Planck Institute for Gravitational Physics (Albert Einstein Institute) @ConorPPurcell

1 Two hundred Irish retailers for all your online Christmas shopping
2 Father unaware partner and baby dead until gardaí called to raise alarm
3 Anatomy of a lockdown U-turn: Holding out against Nphet a gamble politicians unwilling to take
4 Love in a time of Covid: John and Mary marry over 40 years after first meeting
5 ‘Blanket’ ban on mother and baby homes data access contested
Real news has value SUBSCRIBE

Almost €160,000 worth of drugs seized in Meath grow house by gardaí 23:48
Government warned by pastors of ‘severe’ consequences if churches are not opened up 22:54
‘Blanket’ ban on mother and baby homes data access contested 22:25
Dropping Covid-19 positivity rates give grounds for hope, says HSE boss 21:55
No voluntary redundancy programme for the HSE at this time, health chief tells staff 21:32