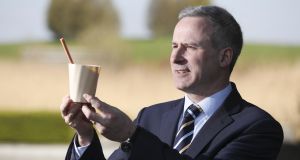 Household food waste is under the spotlight recently, with current estimates that we waste up to one third of the food we buy (costing about €700 per household per year). This means the contribution of food wastage emissions to global warming is almost equivalent to global road transport emissions.

Now, waste materials from the agricultural and food-processing industry is gaining attention as researchers seek new uses for everything from chicken manure to potato pulp.

Finding new, more profitable ways of using agricultural and food-processing waste materials was the focus of AgroCycle, a three-year long international study, led by researchers at the Agriculture and Food Science Centre at University College Dublin (UCD). The study, which received €7 million in funding from the European Commission’s Horizon 2020 and €1 million from the People’s Republic of China, had 26 partners across Europe and three in China.

“It’s important to stress that we’re talking about unavoidable waste – or byproducts – of agriculture and food processing. This is a global issue so working with Chinese researchers was of benefit to us,” says Dr Tom Curran, the project coordinator of AgroCycle and assistant professor at the school of Biosystems and Food Engineering at UCD.

Europe generates about 1.3 billion tonnes of waste every year, of which 700 million is agri-waste. The issue for much of these waste materials is that they currently have very low or no value and often cost money to be transported from farms and food-processing plants.

Take, for example, chicken manure – which chicken farmers in Monaghan and Cavan often pay to transport to tillage farmers in other parts of the country. The AgroCycle researchers found this manure could be used as a feedstock for bioreactors [anerobic digestors] to produce electricity.

“When we visited chicken farms in China, we realised that they could have enough feedstock to fuel a bio-refinery on site such are the scale of production facilities,” says Prof Shane Ward, professor of biosystems engineering at UCD.

New uses for waste materials such as rice bran, potato pulp, forest residues and waste from wine-making were investigated by research teams. Edible drinking straws, cups and plant pots partially made from potato pulp [left over after chips/readymeals are made], cookies and “rice-cream” made from rice bran (residues from rice-processing) and a biodegradable potato pulp packaging to replace single-use plastic wrapping were among the prototypes developed by researchers across European universities.

One research team grew duckweed in a tank from pig effluent with the view to creating an on-site food source for pigs. “This showed us how animal feed can be grown directly from waste on the same farm rather than spreading manure on the land to grow tillage crops or grass for animals,” Curran explains.

This research team focused on an area in the north-west of Germany where the manure from intensively reared pigs is currently transported 500km to a region in the east of Germany. If the pig farmers could grow duckweed in containers on their farms, this would give them food for their pigs and an on-site use for the pig effluent.

A research team in Nanjing Technical University, China, created microbial fuel cells in the laboratory with the view to scaling up the technology to make electricity to power sensors or LED lights at waste water or biogas facilities.

Each prototype in the AgroCycle project had to undergo a lifecycle assessment as part of the research brief to ensure there weren’t any social, economic or environmental costs if it was to be developed on a commercial basis. “The lifecycle assessment looks at the current use of the waste material, what it’s replacing if it was to be developed, the energy used in its production and any emissions from this process,” adds Dr Fionnuala Murphy, assistant professor in the School of Biosystems & Food Engineering at UCD, and coordinator of the MSc in sustainable energy and green technologies.

Curran says each prototype received positive results from the lifecycle assessments carried out. “It’s one thing to know that a product comes from a sustainable bio resource but it also has to be sustainable if used in a processing plant,” he says.

Ward believes there is great potential for agricultural and food-processing waste to be used in the production of bio-fertilisers as a viable replacement for expensive and environmentally-damaging mineral fertilisers.

Patrick Barrett, agricultural inspector in research at the Department of Agriculture, says projects like AgroCycle can demonstrate technologies linked to suitable biomass supply chains. “This will allow for regenerative agriculture and biodiversity preservation and the displacement of fossil-fuel-based inorganic fertilisers with organic fertilisers,” he says.

The development of a website, AgroCycle Marketplace, to connect farmers and food processors with potential users of their waste materials has been one of the most successful aspects of the project to date. “People from the biogas industry have told me that this is a long awaited solution which will allow waste producers to connect to the biogas industry across Europe. Feedstock is what’s needed by that industry,” Curran adds.

There are currently about 10 bioreactors in the Republic but the target is for 20 per cent of gas to be supplied by these bio-digesters by 2030. “Up to 20 per cent of what fruit and vegetable farmers produce is wasted and using this as a feedstock for biodigestors adds value to what can’t be sold for human consumption,” says Ciara Beausang, a UCD PhD researcher on the AgroCycle project.

AgroCycle researchers are currently working with Nova UCD to develop a business model for the AgroCycle Marketplace website. Similar discussions are taking place to look at the commercialisation of edible straws – the timing of which might be just right with the EU ban on single-use plastic items due in 2021 – see agrocycle.eu

Researchers at the Froebel Department of Primary and Early Childhood Education at Maynooth University have developed a free online educational website for use in primary schools. Through animated videos, rap songs, games and lots more, the site explores sustainable living, zero-waste ideas, climate, the bio-economy and the circular economy.

“Our resources are so timely, supporting primary school children, the leaders in the recent climate strikes in waking up the adults,” says project leader Dr Máire Nic an Bhaird.

AgroCycle Kids won first place in the Think Biobased Challenge European competition recently. The materials have been introduced in schools in Dublin, Wicklow, Galway and Beijing in China. They will be available to all primary schools throughout Europe and in China from September, 2019. More details athttp://kids.agrocycle-platform.com/