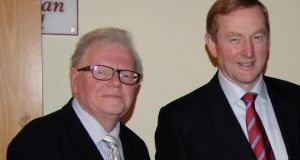 On the final day of Enda Kenny’s term as Taoiseach on Tuesday, Kevin O’Malley, his loyal, long-serving lieutenant in Co Mayo, showed no emotion, just pride and delight.

The retired shopkeeper (81) was there when Henry Kenny, Enda’s father, first entered the Dáil in 1954. He was there, too, 21 years later in 1975 when Enda was carried by jubilant supporters, shoulder-high, across the plinth of Leinster House, having successfully contested the Mayo West byelection caused by his father’s death.

Surrounded by pictures and other memorabilia, O’Malley, now president of the Castlebar Fine Gael Cumann, recalled how “Henry brought me into politics. He wanted me to stand for Castlebar Urban Council. At first I refused, then I relented. I stood at the 11th hour but was defeated.”

Mr O’Malley was by Henry Kenny’s side at sometimes wet and windy church gates over two decades when the latter, an All-Ireland winning Mayo footballer in 1936, campaigned successfully in a series of Dáil elections. By the mid-1970s, following Henry’s death aged 64 from cancer, the key Fine Gael backroom figure was to discover that Enda was in the same mould as his father: a light-hearted, genial personality when away from the cut-and-thrust of politics.

“Both took the canvassing seriously but in between the houses the jokes and banter were flying,” O’Malley says.

Enda Kenny’s victory in the 1975 by-election was vital for Fine Gael. It saved the then taoiseach, Liam Cosgrave, whose coalition government held a slender majority, from having to call a general election.

Asked whether, back in the infancy of Enda Kenny’s Dáil career, he anticipated a taoiseach in the making, he shook his head. “Oh no. After all he was only a lad at the time, just teaching for a few years, taking his first steps in politics.”

He recalled Enda’s younger days, when “All these young ladies would attend meetings hoping to get asked out by Enda. Then Fionnuala [O’Kelly, Fianna Fáil press officer at the time] came on the scene . . . You could not ask for a nicer, finer woman. Enda’s bachelor days were over.”

Last Friday night, Mr O’Malley was among a coachload of more than 40 party workers and supporters from Mayo who travelled to Dublin for a function in Government Buildings to mark Enda Kenny’s departure as Taoiseach.

“Enda was most gracious and grateful,” he said. “He thanked us all profusely for helping him out over the years.” said Mr O’Malley.

He added that Enda Kenny might want to take a rest after more than four decades at the coalface of Irish politics. “He has had to fight tooth and nail rebuilding Fine Gael and making it the largest party in the country. He has had his critics in the media but history will tell us he’s been one of the best taoisigh the country ever had.”

Asked if a continuance of the dynasty was likely, with Aoibhinn Kenny contesting a Mayo Dáil seat previously held by her father and grandfather, he said he had talked to her about that prospect recently. “She didn’t say no to me but that doesn’t mean she is going to say yes. National politics nowadays is a hard trade, a vocation.”