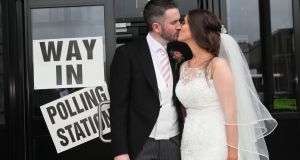 Alliance Party candidate for Belfast West Sorcha Eastwood – with her husband, Dale Shirlow – at a polling station in Lisburn on their wedding day. Photograph: Brian Lawless/PA 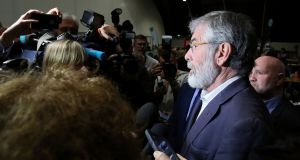 Sinn Féin president Gerry Adams speaks to the media at the count centre at the Titanic Exhibition Centre in Belfast after the polls closed in the UK general election. Photograph: Paul Faith/AFP/Getty Images 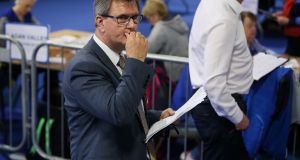 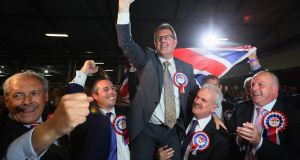 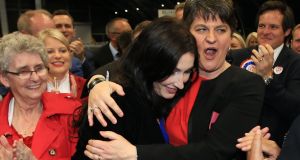 The newest DUP MP Emma Little Pengelly (centre) gets a hug from party leader Arlene Foster after she won the South Belfast seat from the SDLP at the Belfast count centre. Photograph: Paul McErlane

The Democratic Unionist Party and Sinn Féin made major gains in the Westminster election in Northern Ireland at the expense of both the SDLP and Ulster Unionists who lost all their five House of Commons seats.

The DUP held the eight seats it won in the last Westminster election in 2015 and gained South Belfast from the SDLP’s Dr Alasdair McDonnell and South Antrim from the Ulster Unionist Party’s Danny Kinahan.

Sinn Féin increased its number of seats from four to seven, in the process taking the seats of two former SDLP leaders, Mark Durkan in Foyle and Margaret Ritchie in South Down.

The only centre-ground MP to hold a seat was independent unionist Lady (Sylvia) Hermon in North Down.

The DUP’s Emma Little Pengelly, who lost her Assembly seat in March, took the seat of another former SDLP leader, Dr McDonnell, in South Belfast.

She was assisted in her campaign by former DUP leader and first minister Peter Robinson who brought her into politics.

Former Sinn Féin infrastructure minister Chris Hazzard won the South Down seat of Ms Ritchie which the SDLP had held for the past 30 years.

The biggest shock to the SDLP was the loss of Mr Durkan’s seat in Foyle which Sinn Féin’s Elisha McCallion won by 169 votes after a recount.

In Fermanagh South Tyrone Sinn Féin’s Michelle Gildernew regained the seat that she lost to Tom Elliott of the DUP two years ago.

The DUP man won with a majority of more than 2,000 votes although Mr Finucane increased the Sinn Féin vote in the constituency by more than 5,000 votes.

Alliance leader Naomi Long had targeted the seat of DUP MP Gavin Robinson in East Belfast but the DUP man won comprehensively with a thumping majority of close to 8,500 votes.

The DUP saw its overall vote rise by 10 per cent to 292,316 votes. This was 53,400 votes in front of Sinn Féin compared to the shock of Sinn Féin coming within one seat and fewer than 1,200 votes short of the DUP in the March Assembly election.

“This is perfect territory for the DUP obviously because if the Conservatives are just short of an overall majority, it puts us in a very, very strong negotiating position and it is one we would take up with relish,” DUP MP Jeffrey Donaldson told BBC television.

It was expected that talks would begin at Stormont on Monday aimed at reinstating the Northern Executive and Assembly. DUP leader Arlene Foster, who hailed the election as a “good night for unionism”, said that because of the uncertainty over the hung parliament in Britain that these negotiations might be delayed “a little longer”.

Sinn Féin’s Northern Ireland leader Michelle O’Neill said she and her colleagues were willing to resume talks on Monday.

“We will be meeting all the other parties from Monday on. We are ready to talk about the issues because what the public have endorsed is that they want the executive to work, they want the parties to work together,” she said.