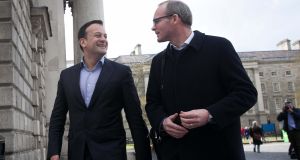 Minister for Housing Simon Coveney has been appointed deputy leader of Fine Gael.

The move was announced at a meeting of the Fine Gael parliamentary party in Leinster House on Tuesday evening.

Party leader Leo Varadkar said that, together, the two former rivals to succeed Enda Kenny will guide Fine Gael’s role in Government and re-energise the party.

“I am really delighted to appoint Simon Coveney as Deputy Leader of Fine Gael and as a member of the party’s executive council,” Mr Varadkar said. “Simon and I will work together to guide the participation by Fine Gael in the Government, and reform and modernise the Fine Gael party in the years ahead.”

Mr Coveney said he was “honoured” to take on the position.

“I will ensure this is an active role which reaches out to the members of the party across the country,” the Cork South Central TD said.

“I look forward to working with the new leader of Fine Gael, Leo Varadkar, and believe that I can bring a strong focus and energy to the party from the grassroots members through to local councillors, and up to the parliamentary party. This is an exciting new chapter for the party and I intend to play a strong role in it.”

The position was previously held by Dr James Reilly.

Meanwhile, Attorney General Máire Whelan is to become a judge on the Court of Appeal.

Ms Whelan is moving on from her current post as incoming Taoiseach Leo Varadkar prepares to appoint a new Cabinet tomorrow.

Ms Whelan served as Attorney General since 2011 and was originally a Labour Party nominee.

Ms Whelan was seen as being close to outgoing Taoiseach Enda Kenny, who reappointed her last year when Fine Gael formed a minority government without Labour.

Congrats to all who worked so hard. pic.twitter.com/65ggded0YJ

The Irish Times understands Frank Callanan is in line for the position. Mr Callanan is a member of the party’s trustees and is seen as a strong supporter of Mr Varadkar.

Earlier, Minister for Foreign Affairs Charlie Flanagan said there will be a “change in personnel” on Wednesday when Mr Varadkar names his new Cabinet.

Speaking on his way into the Cabinet meeting, Mr Flanagan said he had been privileged to serve in his portfolio. “There will be a change in personnel tomorrow. This is entirely a matter for Minister Varadkar,” he said.

Sources close to the Fine Gael leader said Mr Varadkar had given assurances to Ministers who supported his leadership candidacy that they would not be demoted.

It is also certain his leadership rival Minister for Housing Simon Coveney and his sole Cabinet supporter, Minister for Health Simon Harris, will be retained as senior Ministers.

Speculation continued on other potential changes, with Mr Flanagan touted for a possible move to the Department of Justice.

Mr Flanagan, who served as Fine Gael spokesman for justice in opposition, is keen to remain in his current portfolio.

Other names linked to the Department of Justice include Minister for Education Richard Bruton. However, those close to Mr Bruton have stressed his desire to remain in education or move to an economic portfolio.

Mr Coveney is understood to be seeking a move to the Department of Foreign Affairs to oversee the Brexit negotiations.

Speaking on his way into the Cabinet meeting on Tuesday, Mr Coveney said he had “absolutely no comment at all” on the speculation that he could become Tánaiste and Minister for Foreign Affairs .

“Any conversations I have with Leo are confidental and need to be confidental,” Mr Coveney said.

It is likely that most of the new appointments to ministerial rank will take place at junior level.

The four Ministers of State who backed Mr Coveney – Damien English; Marcella Corcoran Kennedy; David Stanton; and Dara Murphy – are not expected to be reappointed.

Government Chief Whip Regina Doherty is expected to be allocated a senior ministry.

Concerns about Mr Varadkar being unable to command a majority when the Dáil votes on his nomination of taoiseach eased on Monday after the Independent Alliance confirmed it will support him.

The group of Independent TDs met Mr Varadkar for two hours to reach a final agreement on a range of issues they had raised with him.

“The talks were open and positive and focused on how we can implement the Programme for Government more effectively. This will involve a review of legislation and seeing which issues can be prioritised,” said Mr Varadkar, who added that Brexit would be its major priority.

All of the Alliance’s Ministers and Ministers of State will retain their current portfolios.