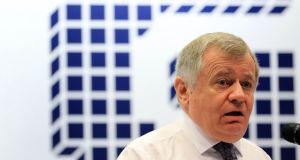 Michael Chadwick, the former chair of the Grafton Group, made the maximum donation of € 1,000 to each of 13 Social Democrats candidates in the 2016 general election. Photograph: Nick Bradshaw.

A Wicklow businessman was the top individual donor to the Irish political system last year, giving more than €15,500 to the Social Democrats and its candidates.

Michael Chadwick, the former chair of the Grafton Group, which is a builders merchants and owner of Woodies DIY, made the maximum donation of € 1,000 to each of 13 Social Democrats candidates in the 2016 general election, as well as contributing €2,500 to the party.

He was by far the highest donor disclosed in the annual donations return published by the Standards in Public Office Commission (Sipo) on Tuesday. He had previously contributed €1,000 each to the party’s then three TDs in 2015: Catherine Murphy, Stephen Donnelly and Róisín Shortall.

The overall donations disclosed by parties and individuals in 2016 was almost €80,000, twice the figure for the previous year which stood at less than €34,000. Sipo has attributed the increase to the fact that last year was an election year.

The highest figure received by an individual was the Wexford TD Michael D’arcy who received €8,650 from nine individuals. Mr Donnelly, now an Independent TD for Wicklow, received a total of €5,000. Another of his donors was the well known distressed mortgage campaigner David Hall.