What’s next for Enda Kenny as he steps down from the top job?

What does the future hold for the man who will no longer be taoiseach? 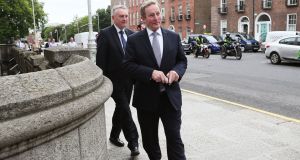 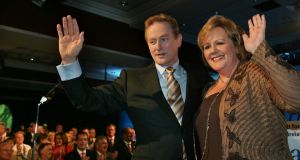 Enda Kenny and his wife Fionnuala: ‘If Fionnuala didn’t understand politics, then it wouldn’t work and I couldn’t do it,” Mr Kenny said. Photograph: Matt Kavanagh

Enda Kenny has not uttered a word about his future plans to those he has spent most time with in Government Buildings and Leinster House.

Having divested himself of the leadership of Fine Gael at the stroke of midnight on May 17th, the mantle of Taoiseach is expected to finally slip from Mr Kenny’s shoulders today.

This has allowed for what he has described as a “brief but appropriate period” during which his successor could engage with TDs and groups supportive of the current administration, and with other parties in the Dáil, “regarding provision of Government for the future”.

Asked if he had any advice for his successor during his final trip as Taoiseach to the US, Mr Kenny cited a text the late Seamus Heaney sent to his wife shortly before he died. “Noli timere – do not be afraid.”

He said the Government had “no time to waste”.

“They should not be afraid of the challenges that lie ahead and every action that should be taken should be taken in the interests fully and solely of the Irish people.”

He described Brexit as a “step into the unknown” and said the Paris climate change agreement was “not removable”, and that it was “disappointing, to put it mildly” that the US had announced its withdrawal from the pact.

“You can’t ignore the accuracy of scientific facts and it’s disappointing, to put it mildly, that America chose this route,” he said.

The Taoiseach also stressed the importance of bringing the undocumented Irish in America “out of the shadows”.

If Mr Kenny has mapped out a future plan for himself, he does not appear to have shared it with any political colleagues.

The Dáil arithmetic means that the soon-to-be backbench TD for Mayo will have to be present for votes. The old convention of former taoisigh being automatically paired no longer applies.

Yet those around him insist the 66-year-old remains “upbeat and chirpy” as he contemplates moving from the sprawling Department of the Taoiseach complex to an ordinary office in Leinster House.

“After 42 years in the house, 13 elections, 15 years as leader of a major party and six years as Taoiseach, I am happy to be in a position to transfer responsibility to a younger generation,” he told the Dáil.

It would be a surprise if he contested another Dáil election.

His friends in Leinster House describe him as a “natural storyteller” who could do well on the lecture circuit. There has been the usual talk of a “big job in Europe”, but nothing has materialised as yet.

Others suggest Mr Kenny could be useful as some kind of an informal “roving ambassador” on the European scene, given his extensive contacts.

“He’s going to find it a shock. He’ll be driving himself home for the first time in a long number of years and he’ll have to open doors himself. It’ll be a shock to the system,” said a friend.

While the source said adjusting to civilian life could be difficult for a Dublin-based former taoiseach, for a Co Mayo-based deputy the change would be even more pronounced.

Politics is notoriously hard on family life, and Mr Kenny is looking forward to spending more time with his most trusted confidante, his wife Fionnuala, and their children, Aoibhinn, Ferdia and Naoise.

I’ve been away constantly, both in opposition and in Government

As he said in 2014: “In this job, I’ve been away constantly, both in opposition and in Government, so if Fionnuala didn’t understand politics, then it wouldn’t work and I couldn’t do it.”

A keen cyclist, Mr Kenny also plans to get back on his bicycle with a number of races coming up, including the Sport Ireland Tour de Burren on June 17th and the Ring of Kerry charity cycle on July 1st.