Brian Burns withdraws from consideration as US Ambassador 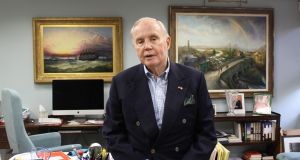 Brian Burns, the business executive and commercial lawyer who US president Donald Trump wanted to be his ambassador to Ireland. Photograph: Simon Carswell

Irish-American businessman Brian Burns has reportedly withdrawn his name from consideration as Donald Trump’s nominee for the position of US Ambassador to Ireland.

It is understood Mr Burns cited failing health as the reason for his withdrawal.

However, the appointment was never officially announced.

A spokesman for the US Embassy in Ireland said it is e are aware of various media reports speculating on who will be Mr Trump’s nominee.

“However, at this time, there has not yet been an official nomination by the White House.

“Once the US president nominates an ambassador, the United States Senate must confirm the appointment. Until that process is complete, Chargé d’Affaires Reece Smyth will continue to lead the US Embassy in Dublin as it works with the Irish Government, as well as Irish and American citizens on a broad range of issues,” said the spokesman.

Mr Burns is the son of an adviser to Joe Kennedy, the father of former US president John F Kennedy.

He has strong Irish roots and is understood to have traced his ancestry to Co Kerry.

Mr Burns, a close friend of the Trump family, is a businessman and a philanthropist from Massachusetts whose grandparents were Irish immigrants.

Mr Burns was inducted into the Irish America Hall of Fame alongside US vice-president Joe Biden in 2013.