Wife of convicted garda killer to run for next Dáil

Pauline Tully, whose estranged husband Pearse McAuley was jailed for attacking her, says she missed politics 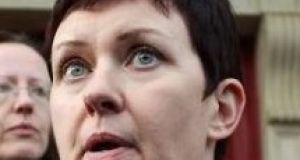 The former wife of convicted garda killer, Pearse McAuley has announced her decision to return to politics and plans to run for Sinn Féin in the next general election.

Mother of two Pauline Tully who was subjected by McAuley to a savage attack with a steak knife at her home on Christmas Eve 2014 while her two children were in the house has confirmed her decision came following reassurances from Sinn Féin at the highest level that she would be given full support regarding her family commitments.

When Caoimhghín O Caoláin announced his decision not to put his name forward for the next Dáil, Ms McDonald spoke at a local rally held in Cootehill, Co Cavan, of her preference for a gender balance ticket in the Cavan/Monaghan constituency.

Ms Tully who has over 13 years experience as a local councillor was the obvious choice as she remained a popular figure in the Sinn Féin party and with locals in the Cavan area.

The history teacher at Breifne College, Cavan told the The Anglo Celt:“I always wanted to run. I missed the council since I left it. I didn’t think it would be possible to be elected to Dáil Éireann and mind two young boys as a single parent but a lot of people urged me to reconsider. When Mary Lou approached me she outlined a weekly schedule and what it would be like at the coal face and what she could do to make it possible for me to run”.

Ms Tully also addressed McAuley in her statement saying “what has happened is in the past, and while it was undoubtedly a harrowing experience we as a family have moved on and thankfully are doing well”.

Ms Tully met McAuley while he was serving a sentence for killing garda Jerry McCabe during an attempted robbery in 1996.