Cora Sherlock: Say No to abortion on demand

Comment: We know that about three weeks after conception a baby’s heart begins to beat 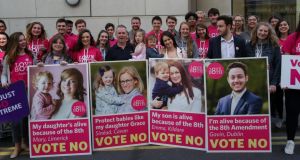 Love Both: Minister for Health Simon Harris and others are wilfully turning a blind eye to the wealth of scientific evidence demonstrating the humanity of the unborn. Photograph: Gareth Chaney/Collins

The Government and those campaigning for unrestricted abortion have spent much of this campaign avoiding discussing the key issue at stake: whether we are going to allow abortion on demand to be introduced in Ireland.

Minister for Health Simon Harris and others have repeatedly claimed that what is planned is a restrictive law. The General Scheme of a Bill to Regulate Termination of Pregnancy makes it abundantly clear that abortion on demand will be introduced until the 12th week of pregnancy; the legislation will also open the door to abortion much later, including up to birth in some cases.

In choosing to strip unborn children of all constitutional protection Harris and others are wilfully turning a blind eye to the wealth of scientific evidence demonstrating the humanity of the unborn.

Technology has advanced enormously since the Eighth Amendment came into being, in 1983.

We can look at what it is that abortion campaigners are seeking to destroy, and we must.

We know that about three weeks after conception a baby’s heart begins to beat.

We know that a baby’s organs and limbs form so rapidly that at eight weeks every body part found in a fully grown person is present. At 11 weeks fingerprints and fingernails appear. Unborn babies at 12 weeks’ gestation are fully formed; moving, stretching, kicking and growing.

They are undeniably human. Yet those on the Yes side believe the only rights the most vulnerable and defenceless people in our society have in our Constitution – the right to life contained in the Eighth Amendment – should be stripped away.

It gets worse. Head 4 of the proposed legislation will make abortion legal until viability – a period six months into pregnancy – on vaguely defined mental-health grounds.

Those calling for this are understandably reluctant to discuss how virtually identical legislation in Britain has been consistently abused to facilitate abortion on demand.

Look at the facts. Of the 190,406 abortions that took place in England and Wales in 2016, about 97 per cent of them were carried out on mental-health grounds.

In England and Wales, for every four babies who are born, one is aborted. This too is a fact, no matter how inconvenient it is for the Yes side. These babies are not ill and they were not conceived in rape. And this referendum is not about these issues.

In the vast majority of cases the unborn children who are aborted in Britain are healthy babies of healthy mothers.

When British politicians voted to allow abortion very few people believed that the law would be abused to such an extent. But they were, and still are, daily.

We are being told by the Yes side that we should trust our politicians to ensure that this won’t happen here.

But countries that have introduced unlimited abortion on demand have witnessed dramatic increases in the number of abortions taking place. When abortion was legalised in Britain the numbers jumped from 20,000 in the first year to more than 100,000 a year just four years later. When abortion is made readily available it stops being a last resort and rapidly becomes the first option.

We are being told that we can place our faith in politicians who have repeatedly changed their position on protecting life. Politicians such as our Taoiseach, who within the past year has stated that he is opposed to abortion on demand but who has since become an enthusiastic cheerleader for abortion without restrictions.

We are being told to hope that abortion on demand in Ireland will not lead to the catastrophic consequences it has led to elsewhere: the ending of countless lives, and the causing of untold hurt and anguish to so many women.

That is the reality of abortion on demand, now and always. And the only way to stop it is to vote No.

Cora Sherlock is spokeswoman for the Love Both campaign