Miriam Lord: Glum faces on No side amid feeling Yeses have it

Fianna Fáil leader Micheál Martin has voiced his support for a repeal of the Eighth Amendment, saying that the proposed legislation, "in no way represents abortion on demand." 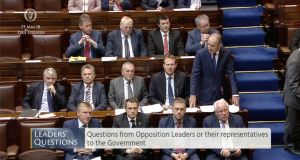 Fianna Fáil leader Micheál Martin has voiced his support for a repeal of the Eighth Amendment, saying that the proposed legislation, “in no way represents abortion on demand” 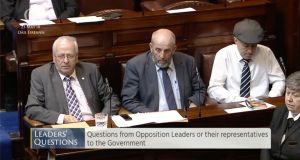 A beautiful sunny day in Dublin. On the pavement outside Leinster House, a man walks up and down with a sign hanging from his neck.

“Yes Voters” it reads. “You should have been aborted.”

A woman pushing a baby-buggy shoots him a filthy glance as she passes. “You’re disgusting,” she snaps, hurriedly escaping his noxious presence.

International news crews are arriving in the city to cover the referendum, most of them coming from the UK and last weekend’s royal wedding. There is talk that Kay Burley from Sky News has landed.

Their respective political supporters reflect the mood. The party leaders are calm and reasoned and cautiously optimistic.

While Mattie McGrath complains ever more loudly and angrily about alleged electoral fraud – “Majella from Mayo” got voting cards as did a French lad in Galway. And the disgraceful media bias against the No side has been, well, disgraceful. It’s all one big “stitch-up”.

Meanwhile, back to Leinster House, where the party leaders are making their final remarks in the chamber before Friday’s vote. They speak with one voice, and that voice says an emphatic “Yes”.

The Taoiseach thanks all of them for their work during the campaign and pays particular tribute to socialist TDs Ruth Coppinger and Claire Daly for their early work in putting the abortion issue on the political agenda in Leinster House, “perhaps at a time when many of us would have preferred not to deal with it”.

The atmosphere in the chamber is close to one of relief. There is a definite feeling across all the parties now that the Yeses have it.

But not everyone is happy. Sinking retain spirits are confirmed afterwards in the corridors by doleful men solemnly predicting that the No vote in their rural constituencies will not nearly be high enough to swing the result their way.

As the leader of Fianna Fáil reaffirms his support for repealing the Eighth Amendment and the proposed legislation to follow, four male colleagues sit in the row in front of him looking extremely glum. Michael McGrath, the finance spokesman tipped as a leadership contender, shakes his head now and then, and sighs heavily, his pinched expression trapped somewhere between distraught and disgusted.

Next to him, James Browne from Wexford, another staunch No campaigner, looks similarly stricken. And beside him, Meath’s Thomas Byrne and then Cavan’s Brendan Smith, two more committed anti-abortion TDs. They bury their noses in their mobile devices while their leader and opposing leaders talk of a better future.

“I want the people who are worried about this decision . . . and who will vote ‘no’ in clear conscience, to know that if there is a Yes vote this weekend, Ireland will still be the same country it was before the vote. It will just be a little bit more compassionate,” says Leo Varadkar.

When talk finally moves from the referendum, McGrath and Browne jump up together and rush from the chamber. Micheál Martin, the one most likely to be on the right side of history come Saturday, watches them go.

Earlier, Martin made sure to put on the record that the legislation before the Dáil in the event of a Yes vote “in no way presents abortion on demand nor is it comparable to the legislative regime in the UK. That needs to be said.”

He explained the lengthy process whereby that legislation came about. First, the Citizen’s Assembly.

“A stitch-up!” declared Mattie McGrath, who was very agitated.

And then the Oireachtas cross-party committee.

Not happy. But then, outside Leinster House earlier in the morning, there came strange rumblings from the No camp, whose disparate groups appeared to be fracturing under the pressure of possible defeat. Cora Sherlock, deputy chairperson of the Pro-Life Campaign (has anyone ever heard from the chairman during this campaign. Is there one? Where is he/she hiding?), hadn’t appeared at the previous night’s big TV debate, as expected.

As anti-abortion campaigners immediately blamed the liberal media’s interference for the no-show of one of their star speakers, Sherlock issued a strange little video, shot in a Spartan, bunker-like room, claiming she hadn’t withdrawn from the debate but had wanted to participate.

She was only short of holding up to the camera a newspaper with the day’s date on it to prove she is still in the campaign.

Meanwhile, as the news reporters and camera crews fanned across Dublin in search of teenage firebrands and fulminating clerics, the Sinn Féin leader was speaking about abortion pills and one mother’s story of having to watch her teenage daughter bleed at home for three days having secretly taken them.

Leo Varadkar said that retaining the Eighth Amendment ties the hands of medics who want to look after women properly.

Ruth Coppinger classed the referendum as “one of the most important votes in decades in this country”. She attacked the No campaign for the “thinly veiled misogyny” of its messages before starting a list of all the social issues its leading lights over the years had opposed.

The most bizarre intervention came from Fianna Fáil’s Éamon Ó Cuív, who said the other day that we were all unborn once. (Although it might have been a different story for him if his grandfather Dev hadn’t had that US passport after the 1916 Rising when his comrades were being executed by the British.)

He told the Taoiseach the prison sentence of up to 14 years on the books for women who have abortions could be reduced by treating abortion as infanticide under the Criminal Law (Insanity) Act of 2006. Infanticide, said Young Dev, is now treated as manslaughter “which can carry a very, very short prison sentence”.

He also asked the Taoiseach to apologise for saying in the Dáil that he was in favour of decriminalising the abortion pill. Which the Taoiseach duly did.

Leo told Éamon he thought he heard him say this, but was happy to stand corrected and acknowledge this isn’t his view.

“I didn’t say what my view was, Taoiseach. That’s not what the issue is. The issue was that you said I said something I didn’t say. But my view is a different issue.”

That’s cleared that up so.

On the subject of infanticide, Leo explained that the amendment holds that the right to life of the unborn, even at one week’s gestation, is equal to the right to life of a pregnant woman. “So the penalty for having an abortion has to be equal to the penalty for killing a pregnant woman, which is not infanticide because, obviously, infants do not get pregnant. The penalty has to be at the level of homicide or manslaughter.”

Was Ó Cuív seriously taking the Dáil down this rabbit hole and women taking pills or travelling abroad daily to terminate crisis pregnancies?

And how strange is it that a woman gets a lesser sentence for killing a baby or toddler, with her mental health taken into account, but a women terminating a five-week old foetus gets a longer sentence?

It would be truly daft, if it wasn’t so awfully serious.