Abortion referendum vote: everything you need to know

Ballot paper will ask voters if they wish to approve Bill seeking to repeal Article 40.3.3 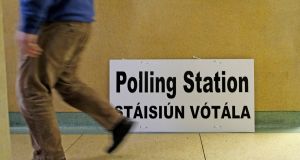 The ballot boxes are open from 7am to 10pm across the country and the results will be counted on Saturday morning. Photograph: Julien Behal/PA Wire

The ballot paper in Friday’s referendum will ask people if they wish to approve the Thirty-Sixth Amendment of the Constitution Bill.

The Bill seeks to repeal Article 40.3.3 of the Constitution, and provision may be made by law for the regulation of termination of pregnancy.

Voters will be asked to state their name and address upon arrival in their polling station. They may be required to produce evidence of identity and, if he or she fails to do so, they will not be permitted to vote.

Where the presiding officer is satisfied as to the elector’s identity, a ballot paper is stamped and handed back to the person voting.

The voter indicates whether he or she approves of the proposal by marking an “X” in either the “yes” box or the “no” box on the ballot paper.

Persons with a disability, or a reading and writing difficulty, or those with a visual impairment can be assisted by the presiding officer or by a companion.

A person may vote only once at a referendum. Anyone who is suspected of committing an electoral offence can be arrested.

The ballot boxes are open from 7am to 10pm across the country and the results will be counted on Saturday morning.

Over 3.1 million people are eligible to vote. Figures from the Department of Housing show 118,389 people were added to the supplementary register for this referendum including 4,957 from Meath, 9,049 from Cork and 7,413 in Kildare.

Twelve offshore islands on the west and northwest coasts begin voting in the referendum on the Eighth Amendment on Thursday.

Ballot boxes are also being delivered early to the three Aran islands and Inishbofin in Galway West; and to Clare Island, Inishbiggle and Inishturk in the Mayo constituency.

The 460 registered voters on islands in the Cork South-West constituency – Bere, Cape Clear, Dursey, Hare and Whiddy islands, along with Long Island and Sherkin – cast their ballots with the rest of the State on Friday.