Corbyn to call for return of British-Irish Intergovernmental Conference 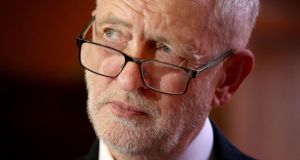 Jeremy Corbyn will on Thursday call on the British government to reconvene British-Irish Intergovernmental Conference in an effort to revive power sharing at Stormont. In a speech at Queen’s University Belfast, the Labour leader will say that the spirit of sacrifice and courage which produced the Belfast Agreement must be rediscovered to secure the next 20 years of peace and greater prosperity.

“Devolution and power-sharing have given every community a voice and helped maintain the peace process,” Mr Corbyn will say.

“If the current stalemate in Stormont cannot be sorted out in Belfast, I call on the UK government to reconvene the British-Irish Intergovernmental Conference. We must step up to find a creative solution, in the spirit of the Good Friday Agreement, that avoids a return to direct Westminster rule and lays the ground for further progress for all communities.”

The Labour leader will argue that his party’s policy for a customs union with the EU and a new relationship with the single market would help to avoid the restoration of a hard border in Ireland. And he will accuse Theresa May’s government of risking an undermining of the co-operation and relative harmony in Northern Ireland of recent years in pursuit of a free-market ideology.

“Labour will not support any Brexit deal that includes the return of a hard border to this island. But we are also clear there must be no border created in the Irish Sea either. That is why Labour has put forward a plan that would go a long way to solving this issue, a plan for which I believe there is a majority in Westminster. Let’s not give up years of hard fought co-operation and stability for the pipe dream prize of race-to-the-bottom free trade deals with the likes of Donald Trump,” he will say.

“Opposition to the idea of bringing back a hard border to this land isn’t just about avoiding paperwork or tariffs, important though that is, it’s about deep rooted cultural and community ties. An open border is a symbol of peace, two communities living and working together after years of conflict, communities who no longer feel that their traditions are under threat.”

Conservative party chairman Brandon Lewis dismissed Mr Corbyn’s comments, accusing Labour of saying one thing in private and another in public, in a reference to shadow international trade secretary Barry Gardiner’s description of the Belfast Agreement as a “shibboleth”, for which he subsequently apologised.

“Labour are only interested in frustrating Brexit rather than making it a success for the whole United Kingdom. This government remains resolute in our commitments to Northern Ireland, including upholding the Belfast Agreement. Labour on the other hand, say one thing in public but then in private say the Brexit risks to the Belfast Agreement were being played up. Only the Conservatives will get a Brexit deal that works for the whole of the UK,” Mr Lewis said.