‘Where we have a Yes vote, I imagine women would access services across the Border’ 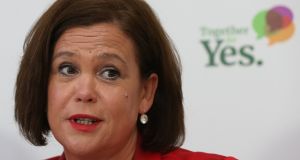 Sinn Féin leader Mary Lou McDonald: It is not acceptable to “solve the problem for women and girls south of the Border and say that it is alright if the same problem exists across the Border”. Photograph: Niall Carson/PA

Sinn Féin leader Mary Lou McDonald has said women in Northern Ireland may travel to the South for terminations if legislation to allow for access to abortion is passed.

Ms McDonald told The Irish Times it was her belief there should be unity in the laws across the island of Ireland.

It is not acceptable to “solve the problem for women and girls south of the Border and say that it is alright if the same problem exists across the Border”, Ms McDonald said.

“I can only hope that Brexit and all of that disruptive dynamic would not do anything to harm or impede women’s ability to access services. There is no substitute for women and girls accessing the services they need on their own doorstep. I am not arguing that it is an ideal scenario, it is not.”

However, she stressed the scale of the task in convincing “some within political unionism” will be similar to the introduction of marriage equality in the North.

Sinn Féin’s current position is to allow for terminations when a mother’s life or health is at risk, in cases of rape, incest and fatal foetal abnormalities. This is its party position across the island of Ireland.

Ms McDonald said she will bring a new policy to an ardfheis in June to make its policy in line with the proposals put forward by the Government, to allow for access to abortions within the first 12 weeks of pregnancy.

Sinn Féin has struggled with this issue and its position is “evolving”, the party leader added.

There has been a level of conscience afforded to members on this issue that is not the case on other issues, she added.

In an interview with The Irish Times, Ms McDonald criticised the position of Sinn Féin TD Peadar Tóibín , who participated in a televised debate advocating a No vote.

Ms McDonald said she preferred if all elected people respected the wishes of the party’s ardfheis and the decisions made by the party’s delegates.

“I would prefer had Peadar not taken it upon himself to go on a solo run, or to solely be concerned with his personal views.

“There is a point where adult to adult I have to accept that as well I am not his mammy, he is a grown-up, he is a big boy, he knows what he is doing. I know when he speaks, he speaks for Peadar Tóibín, he does not speak for Sinn Féin.”