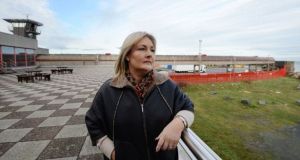 Opposition parties on Tuesday strongly criticised the Fine Gael byelection candidate in Wexford Verona Murphy after saying children as young as three could have been “manipulated” by Isis.

Ms Murphy has faced criticism in recent days for a number of controversial comments on migration.

She apologised for a second time on Monday night after commenting to The Irish Times, during a canvass last Friday, that she believed Isis was a “big part” of the migrant population in Ireland.

She was also forced to apologise on Sunday after comments to RTÉ in which she said some asylum seekers may need to be “re-programmed.”

In fresh remarks, made to the Wexford People last Thursday, Ms Murphy said some very young children may have been radicalised by Isis.

“We have to understand no matter how we feel, the genuine people are coming from very bad situations, war torn countries. Nobody wants to live like that.”

“We have to have empathy in that these people are coming from the worst possible situations.

“We also have to take into account the possibility that Isis have already manipulated children as young as three or four.”

Fianna Fáil’s health spokesman Stephen Donnelly said on Tuesday these comments needed to be condemned and he called on Taoiseach Leo Varadkar to do so.

“The Government has failed the people of Wexford on transport, housing and on broadband and come a byelection, the Government candidate starts pointing at immigrants and then, as is reported in the [LOCAL]papers this morning, is pointing at three and four year old boys and girls and saying well maybe they’ve been radicalised.

“These kind of comments need to be condemned in the strongest possible terms, and the Taoiseach should come out this morning and tell us how he feels, particularly in light of some of his own comments in recent weeks about keeping an eye on particular nationalities that come into this country.”

“Obviously the notion that you would bring three and four year old children into the debate, that they might need to be reprogrammed because they could be manipulated by Isis is just as profoundly ignorant. And it is profoundly wrong.”

Mr Howlin also criticised the Minister for Justice Charlie Flanagan for organising a trip to a refugee and asylum centre in Waterford on Monday night. “That is just really unacceptable. To use the most vulnerable people who are fleeting persecution as a vehicle to rehabilitate your candidate, I just think that is wrong.”

“I realise now I had a poor understanding of asylum issues and I apologise wholeheartedly for my remarks,” she said.