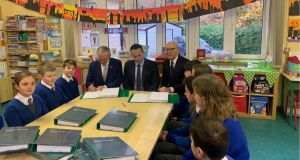 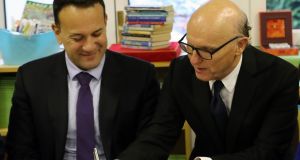 Taoiseach Leo Varadkar hailed the “biggest investment in rural Ireland ever” as he announced the signing of the contract for the National Broadband Plan at an event in Glendalough Co Wicklow this morning.

Mr Varadkar said the project, which will see high-speed fibre broadband connections brought to over half a million remote homes and premises over the next seven years, was the “most important since rural electrification”.

“We will ensure that rural Ireland has a 21st century future,” he said.

The contract with National Broadband Ireland, the company led by US businessman David McCourt and which has been dogged by controversy for several years, was finally signed this morning after the Cabinet approved the deal at an early morning meeting in Government Buildings.

Several ministers travelled to Co Wicklow for the event, at which all described the plan as a historic development for rural Ireland.

“Twenty-first century Ireland is not about reopening post offices,” the Taoiseach said.

“It is not about reopening old garda stations. It’s about working from home . . smart farming. . . doing business online . . . . digital education . . and fewer car journeys,” he said.

The controversial contract wll extend broadband coverage to over 500,000 rural homes and business.

The plan, which could cost the taxpayer as much as €3 billion in the coming years, has been subject to widespread criticism, both from outside and inside Government.

Work on the project is expected to commence next year and take up to seven years to complete, although the majority of homes with be “passed” - ie have access to the network and the choice of connecting to it - within the first three years.

The majority of premises will get fibre broadband, but up to 5 per cent located in the most remote areas will have wireless connection. Of these, 130,000 connections will be made in the first two years with between 70,000 and 100,000 properties getting access per year thereafter.

Minister for Communications Richard Bruton has said it was a “historic day” for rural Irelamd. He said would guarantee rural communities would not be left behind.

He said work “will begin immediately and over 90 per cent of premises in the State will have access to high speed broadband within the next four years.” It would have a “transformative impact” on rural Ireland and open up opportunities, he said.

However, Ministers have strongly defended the plan. Following legal drafting of the contract, and approval by the European Commission last week, the final step in agreeing the plan will be taken this morning. It is expected that work on the first connections will begin within weeks.

The plan will provide high-speed fibre broadband to homes and businesses in areas – mostly remote parts of the country – that are not served by commercial operators. The contract will last for 25 years, after which the operator will own the network. Last year The Irish Times revealed that the total cost of the contract to the taxpayer could be as high as €3 billion.

The Government is proceeding with the plan despite a recent vote in the Dáil calling for the contract to be renegotiated to ensure that the network was owned by the State, and not the commercial operator.