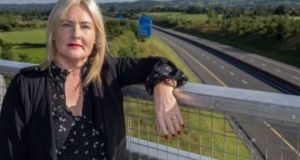 Verona Murphy: ‘We also have to take into account that possibility that Isis have already manipulated children as young as three or four’. Photograph: Dylan Vaughan

Taoiseach Leo Varadkar has said he is standing by the Fine Gael candidate in the Wexford byelection Verona Murphy, despite the emergence of further controversial comments.

The paper also says Ms Murphy said there needed to be more policing on immigration. “We have to have empathy in that these people are coming from the worst possible situations. We also have to take into account that these possibility that Isis have already manipulated children as young as three or four.”

Ms Murphy also says that drink driving laws have “decimated rural Ireland”, the paper reports. “The enforcement here always appears to be in the Irish individual,” she said.

Four Dáil byelections will take place on Friday, November 29th. They became necessary after a sitting TD from four constituencies was elected to the European Parliament in May.

Speaking at an event in Co Wicklow to mark the signing of the Government’s National Broadband Plan, Mr Varadkar said that he still supported Ms Murphy and that he would campaign with her in Wexford.

“Verona’s a very outspoken, very independent person,” Mr Varadkar said. “She’s not going to be the sort of person who toes the party line. And I think on some occasions she’s got it absolutely wrong. But she is the selected candidate and I will certainly be campaigning with her before polling day.”

However, Mr Varadkar again distanced himself from pervious comments by Ms Murphy in relation to migrants.

“I spoke to her about them yesterday They were misinformed. They were ill-advised. They were wrong. And she was right to apologise for them.

“We have hundreds of thousands of people in Ireland who are migrants. They contribute to our economy to our society, to our public services. A very small number come from Iraq and Syria, and those that do are much more likely to be fleeing Isis than jhave anything to do with Isis. She understands that now,” he said.

Later Mr Varadkar again reiterated that he had confidence in Ms Murphy as the Fine Gael candidate.

The Taoiseach sought to draw a contrast between the speed with which Fine Gael had dealt with Ms Murphy’s comments and the reluctance of Fianna Fáil to censure its candidate in Dublin Fingal, Lorraine Clifford-Lee over tweets from several years ago.

“When Fianna Fáil had an issue with their candidate last week, for the first few days there was no apology. There was a suggestion that it was all part of a right-wing conspiracy and a smear campaign. We acted very differently. We acted immediately. I spoke to Verona. Charlie Flanagan, who is director of elections, spoke to her too.

“We explained to her that her comments were unacceptable, that they were misinformed and that she needed to develop a better understanding around the issues around asylum and immigration. And she’s done that, and she’s apologised and retracted the remarks as a result. So, I think we acted much more swiftly than Fianna Fáil did.”

Earlier, Labour leader Brendan Howlin said it was not appropriate of Verona Murphy to “use asylum seekers as a re-education tool” after she had made false statements.

In a statement released on Monday night, Ms Murphy apologised for earlier remarks “wholeheartedly” after visiting an emergency reception and orientation centre and witnessing asylum and refugee issues.

Ms Murphy had said the Islamic State (Isis) was “a big part of the migrant population” . Ms Murphy made the comments to The Irish Times while canvassing in Wexford last Friday and also said that services are needed in Ireland to “alleviate that type of indoctrination”.

“I realise now I had a poor understanding of asylum issues and I apologise wholeheartedly for my remarks,” she said on Monday night.

However Mr Howlin said it was not appropriate for Ms Murphy to “use asylum seekers as a re-education tool, for a Road to Damascus conversion after statements that were just plainly untrue.”

Candidates should know the facts, he added. “Or if they don’t know the full facts, not to peddle misinformation.”

Mr Howlin also accused Charlie Flanagan of “blurring the lines” between his position as Minister for Justice and as director of elections for Fine Gael.

“Charlie is a decent man, but he has over stepped the mark,” Mr Howlin told RTÉ radio’s Today with Séan O’Rourke show.

Comments Ms Murphy about migrants were based on “rumours and misinformation”, the Minister for Justice said on Monday .

Mr Flanagan said it was “a sad fact that this kind of misinformation is now threatening to take root in our country” and “spread sometimes maliciously and sometimes naively, through various channels including on social media”.

“I believe that public representatives and those running for election must step up and confront fabrications,” he said.

In the Dáil, People Before Profit TD Bríd Smith called on the Taoiseach to de-select Ms Murphy because she had “doubled down on the hateful rhetoric we’re heard in the media from her”.

Ms Smith said “not only is she blaming the poor for poverty she is blaming the migrants for every other crisis that exists”.

Ms Smith said Ms Murphy “needs to be de-programmed”, adding it was “utterly shameful what she said”.

The Taoiseach said Ms Murphy had described in the Wexford People interview her own experience of being homeless.”I don’t think that really came across in the way you’ve described it.”

When Ms Smith asked the Taoiseach “how high is your bar against racism in your party?”, he replied that “as somebody who probably knows a little bit more about experiencing racism than perhaps you do my bar - I don’t know whether you say it’s high or low - it’s certainly not something that is tolerated in the party I lead”.