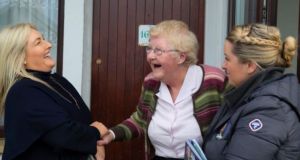 Comments by a Fine Gael byelection candidate about migrants, including that the Islamic State (Isis) was “a big part of the migrant population”, were based on “rumours and misinformation”, the Minister for Justice has said.

Responding to remarks made by Wexford candidate Verona Murphy, Charlie Flanagan said it was “a sad fact that this kind of misinformation is now threatening to take root in our country” and “spread sometimes maliciously and sometimes naively, through various channels including on social media”.

“I believe that public representatives and those running for election must step up and confront fabrications,” he said.

He said Ms Murphy had acknowledged that her statements on asylum seekers and refugees were not based on fact. Ms Murphy made the comments to The Irish Times while canvassing in Wexford last Friday and also said that services are needed in Ireland to “alleviate that type of indoctrination”.

In a statement released last night, she apologised “wholeheartedly” after visiting an emergency reception and orientation centre and witnessing asylum and refugee issues.

“I realise now I had a poor understanding of asylum issues and I apologise wholeheartedly for my remarks.

Ms Murphy, who is the president of the Irish Road Haulage Association, also came under pressure on Monday when Fine Gael TD Noel Rock said her remarks were “ignorant”, “ill-informed” and “dangerous”.

Fianna Fáil leader Micheál Martin said the comments were “Verona Murphy’s comments are “offensive and quite dangerous as they have no basis in fact whatsoever”.

“Fine Gael seem to be playing the populist card and this has no place in Irish politics,” he said.

Labour leader Brendan Howlin called on Taoiseach Leo Varadkar to disassociate himself and the Fine Gael party from them.

1 ‘It was pitch black’ - Rescued teenager describes night afloat with her cousin in Galway Bay
2 A million trees, including 400,000 oaks, to be destroyed this week
3 Mike Pence fretting as Kamala Harris shakes up Republicans
4 Aaron Brady, the man who said with pride he was a cop killer
5 Garda killer Aaron Brady will be almost 60 by time he leaves prison
Real news has value SUBSCRIBE