Inside Politics: Fine Gael candidate in Wexford apologises over claim that Islamic State was ‘big part of the migrant population’ 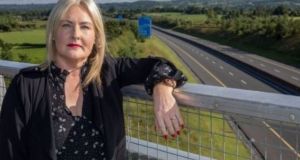 Fine Gael candidate in Wexford Verona Murphy: made the extraordinary claim that Islamic State was ‘a big part of the migrant population’

It’s late November, and if the denizens of Leinster House are kicking around a political football, the air has long escaped from it.

The schedule of the Dáil looks threadbare this week. Other than the Finance Bill, there is only one other piece of legislation before the lower House. This 32nd Dáil is running out of ideas, out of energy and out of time.

And so the focus has veered away from the usual business and the usual issues of Government. Last week, it was about intolerance. It was Noel Grealish’s dog whistles about Nigerian remittances home.

It has also been increasingly about the four byelection campaigns that are ongoing at the moment, and that might provide a portent of the general election that will take place in the next six months.

In that context, last week Lorraine Clifford-Lee had to apologise for tweets from 2011, the language of which was very pejorative of Travellers. That ‘event’ has dented Clifford-Lee’s prospects in Dublin Fingal.

And now, as our colleague Jennifer Bray has disclosed, another leading candidate in a byelection has walked herself into similar trouble over outspoken and misconceived comments on immigrants.

Fine Gael candidate in Wexford Verona Murphy made the extraordinary claim that Islamic State was “a big part of the migrant population”.

As Jennifer reports, she made the comments to The Irish Times while canvassing in Wexford last Friday when she also said services were needed in Ireland to “alleviate that type of indoctrination”.

Last night,Murphy followed the Clifford-Lee example and apologised “wholeheartedly” for the comments. She also visited an emergency reception and orientation centre.

“I realise now I had a poor understanding of asylum issues and I apologise wholeheartedly for my remarks,” she said. Here is the report.

As for Noel Grealish, like his earlier claims that Africans were spongers, he has retreated into silence after his outburst in the Dáil last week. There has been no apology, no correction of the record or no context. It’s clear that he’s following the Peter Casey playbook, knowing that in a multi-seat constituency he could potentially appeal to 20 per cent of voters.

Do controversies like this really matter? Of course, they do. Look at the bracing disclosure made by Nigerian-born RTÉ reporter Zainab Boladale. From Ennis and fluent in Irish, she has been subjected to a torrent of racial abuse online since joining RTÉ in 2017, including the N-word. Here is our report on it.

The UK goes to the polls on December 12th in one of the most highly anticipated elections there in recent times. The outcome will have a far-reaching impact not only on the UK itself, but also on Ireland, as the next British government deals with the Brexit impasse. The Irish Times’s London Editor, Denis Staunton, will write his UK election diary every weekday of the campaign. Today, he previews the first leaders’ debate of the campaign in Manchester as Labour’s Jeremy Corbyn, trailing in the polls, seeks to take the battle to Boris Johnson. Read more here.

We may not have a general election, but like much else this year, we have been paying far more attention to what’s happening in Westminster.

The Tories have a 13 to 14 point lead over the Labour Party. Unlike the election two years ago, it has not started narrowing as yet. Jeremy Corbyn and his advisers hope the momentum will begin to tip towards Labour tonight, when the first of the live televised debates will begin on ITV.

Johnson seems impermeable to scandal, be it his serial adultery or his career-long capacity for being economical with the truth.

Corbyn had a comparatively good election in 2017, but that was partly due to Theresa May’s dismal campaign. Johnson will be a horse of a different colour. That said, he was rattled more than once in debates by Jeremy Hunt during the Tory leadership contest. Corbyn can be good on specifics and details and could yet make up some lost ground before now and December 12th.

The leaders of the smaller parties won’t get a look in for this debate. Lib Dem leader Jo Swinson and the Scottish National Party’s Westminster leader, Ian Blackford, were hoping to be included, but their legal challenges against the decision by ITV failed yesterday.

Jennifer Bray reports on the Minister for Justice’s reaction to Verona Murphy’s comments.

Pat Leahy reports the rural broadband scheme will be signed off today.

Tony Kinsella says the Ireland-France electricity interconnector will mean Ireland will have a stake in the French nuclear debate.

The Cabinet meets today. Tomorrow Taoiseach Leo Varadkar will travel to Zagreb for the two-day annual meeting of the European People’s Party.

The main piece of legislation in the Dáil today is the Finance Bill.

The return of the Judicial Appointments Commission Bill, Shane Ross’s legislation that has been filibustered by Michael McDowell and others.

The Committee on Finance is looking at the issues of tracker mortgages.

The Committee on Agriculture is looking at the operations and strategy of Horse Racing Ireland.