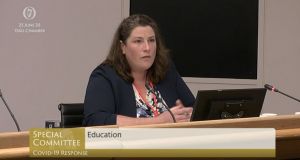 Lorraine Dempsey, chair of Inclusion Ireland, told the committee that parents had been left confused by the changing message the Department of Education was giving about the summer school programme for children with special needs. Photograph: Oireachtas TV/PA Wire

The lack of access to schools and therapists for children with special needs during the pandemic has been “catastrophic”, the Covid-19 committee has been told.

Chair of advocacy agency Inclusion Ireland Lorraine Dempsey highlighted the emotional upset for parents “of seeing children not being able to sleep, destroying their houses or assaulting siblings and not through any fault of their child but arising out of the frustrations and lack of supports”.

The charity also told the committee that parents had been left confused by the changing message the Department of Education was giving about the summer school programme for children with special needs.

TDs looking at the impact on special needs education of the pandemic also heard that parents were concerned about a lack of transport amid fears some children will be excluded from the programme.

Inclusion Ireland advocates for children with intellectual disabilities and the charity also told the committee that parents had been left confused by the changing message the department was giving on the programme.

The summer programme aims to provide learning structures and routine for children with special needs when the normal school year is over.

Ms Dempsey told committee chairman Independent TD Michael McNamara “the lack of access to school and therapists over the last three months has been catastrophic and I cannot overstate that enough”.

Mr McNamara replied that “I do not know what to say in response”. He said that as a State “we need to be aware of the impact that the curtailment of services is having on the most vulnerable”, where “some children are not just failing to develop, they are regressing”.

Inclusion Ireland chief executive Enda Egan told the committee that the National Council for Special Education expressed concern that the scheme could open to challenge on equal status grounds.

“The scheme must be opened to all children with intellectual disabilities, including those in second level as they also experience regression.”

But cohorts of children with disabilities were excluded and he said the scheme “has been characterised by poor planning, leaving schools and families frustrated and in the dark.

“One trade union has stated the lack of guidance makes the scheme unsafe for staff and pupils.”

The charity’s community engagement manager Mark O’Connor said the department had changed the message they gave organisations over a period of weeks about the scheme and this had led to confusion among parents and schools with the exclusion of post-primary children.

“There is no magic that happens at the age of 13 to say that the child’s education won’t regress over the summer period. These children have the same issues as children at primary level,” he said.

“The research is pretty clear that children with intellectual disabilities who have long absences from school can suffer regression in their learning, and to make up that lost ground can take a long period of time.”

The committee was also told parents of children with Down Syndrome were “blindsided” when it emerged that only primary children would have access to the programme and not post-primary students.

When Minister for Education Joe McHugh announced the scheme no distinction was made.

The parents made a submission to the committee but assistant secretary in the Department of Education Dalton Tattan told Sinn Féin TD David Cullinane he did not believe parents were blindsided as they had engaged with the organisation.

He said the decision was not about capacity but “based on where we felt the greatest needs were”.

He told Fianna Fáil TD Mary Butler “we have looked at children with the most complex needs and at those at the greatest risk of regression”. Officials will meet Down Syndrome Ireland again on Friday.