Only Trump and Bolton cared about helping Brexiteers, says former US aide 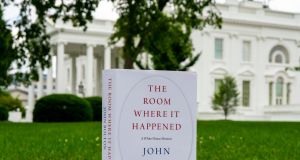 John Bolton’s references to Brexit are detailed in a chapter about the US president’s attendances at summits in Brussels, London and Helsinki in July 2018. Photograph: Doug Mills/The New York Times

President Donald Trump and his former national security adviser John Bolton were among the few in the US administration who cared about helping Brexiteers, Bolton has said in his new book.

The former Trump aide says in his controversial memoir that Britain’s exit from the European Union was “an existential issue” for the UK but also “critically important to the US.”

“We should have been doing far more to help the Brexiteers, and I certainly tried,” Mr Bolton wrote in The Room Where It Happened, his memoir of his 17 months in the White House.

“Unfortunately, apart from Trump and myself, almost no one in the administration seemed to care. What a potential tragedy.”

The book - a copy of which has been seen by The Irish Times - details the former national security adviser’s negative views on the EU and support for the UK’s departure from the bloc, comparing Brexiteers to American revolutionaries who declared independence from the British.

“For the Brits, ironically, Brussels was the new George III” - the British monarch the US declared their independence of - “a remote (politically if not physically), unaccountable, oppressive machine that a majority of British voters rejected in 2016, reversing 43 years of EU membership,” he writes.

Mr Bolton writes that “Brexit’s fundamental impetus was the accelerating loss of citizen control over the Brussels-based mechanisms of the European Union.

“Bureaucracies were making rules that national parliaments had to accept as binding, and the loss of democratic sovereignty was increasingly palpable,” he says in the book.

Mr Trump is trying to block the publication of the book, though it has been leaked to the Washington Post and other US media ahead of publication.

The US president claims that the book contains classified material and should not be printed.

He resigned from the White House in September 2019.

Among the explosive claims in the book are that Mr Trump asked the Chinese leader for help to win re-election when they met at the G20 meeting in January last year and praised China’s building of internment camps for the Uighurs and other minorities as “the right thing to do.”

Mr Bolton’s references to Brexit are detailed in a chapter about the US president’s attendances at summits in Brussels, London and Helsinki in July 2018.

Mr Trump set off a diplomatic firestorm by criticising then UK prime minister Theresa May and her Brexit strategy in an interview with The Sun published on the day he arrived in London.

Mr Bolton writes that “Friday the thirteenth” opened with press stories about Mr Trump’s interview with the Rupert Murdoch-owned tabloid newspaper “basically trashing May’s Brexit strategy.” The president said that he advised May “how to do” Brexit but “she didn’t listen to me.”

“I thought the strategy was in free fall anyway, but it was, as they say in London, a spot of bother for this to happen as the leaders met, supposedly to demonstrate the special relationship at work,” the former presidential adviser writes.

It was during this trip that, according to Bolton, Trump did not realise that the UK was a nuclear power - one of a litany of episodes in the book that showed the US president’s ignorance of basic facts.