Martin to step down as taoiseach in December 2022 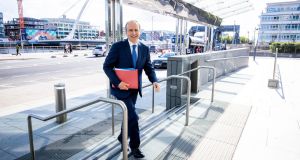 Fianna Fáil leader Micheál Martin will be taoiseach first under the arrangement to rotate the office with Fine Gael, the first time such an arrangement has happened in Irish politics. Photograph: Tom Honan

Fianna Fáil will hand over the office of taoiseach to Fine Gael on December 15th, 2022, under the terms of the government deal agreed between the two traditional political rivals and the Green Party.

The programme for government contains a passage on how the three-party coalition will work, including an “enhanced role for party leaders not holding the office on An Taoiseach”.

Fianna Fáil leader Micheál Martin will be taoiseach first under the arrangement to rotate the office with Fine Gael, the first time such an arrangement has happened in Irish politics.

Fianna Fáil and Fine Gael have committed to treating each other as equals in coalition. Fianna Fáil has 37 Dáil seats (excluding Ceann Comhairle Seán Ó Fearghaíl), followed by Fine Gael on 35 and the Greens on 12.

Fine Gael and Fianna Fáil will each have six senior ministers, and the Greens will get three. There will be two super junior ministers at Cabinet, thought to be one each for the bigger parties, as well as the chief whip.

Mr Martin will be taoiseach first, and the document says: “The leader of Fianna Fáil will hold the office of An Taoiseach from that point until December 15th, 2022, on which date he will offer his resignation to the President and all parties and TDs supporting the government will support the nomination of the leader of the Fine Gael party.”

The office of tánaiste, previously held by former Labour leader Dick Spring in coalition governments with Fianna Fáil and then with Fine Gael and Democratic Left in the 1990s, will be re-established. The programme for government says it will be “independent of the ministry that the tánaiste holds” and will be based in Government Buildings.

“It will be headed by an assistant secretary who shall attend the weekly meeting of government secretaries general,” the document says. It will have a private office, as well as a “policy and programme implementation unit”.

The leader of the Green Party will also have an office within the Department of the Taoiseach.

The three party leaders will meet every week before Cabinet at a new Government Co-ordination Cabinet Committee. It will also meet “on other occasions when deemed necessary”. The committee will be the forum where difficult issues are resolved.

On the taoiseach’s 11 nominees to the Seanad, the document says Fianna Fáil and Fine Gael will choose four each, with the Greens getting two. At least half of those will be women. The remaining nomination will be an Independent, likely from Northern Ireland.

The document also says the parties will work “on a day-to-day basis in a manner which maximises the potential for agreement and actively seeks to avoid points of dispute”, including limits on “public comments about those we share government with”.

There will be a wide reconfiguration of government departments.