Coronavirus: Daily reported deaths in single digits since May 28th 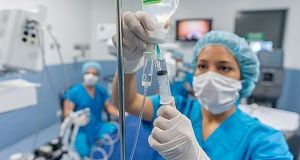 The Special Committee on Covid-19 Response has been told it is ‘inevitable’ that Ireland will experience a resurgence in coronavirus cases as restrictions are relaxed. File photograph: The Irish Times

One additional death from Covid-19 and 11 new confirmed cases of the disease were reported by Department of Health on Thursday.

This brings the death toll from the disease in the State to 1,727 and the total number of known cases of infection to 25,405.

The number of daily reported deaths has been in single digits since May 28th.

State chief medical officer Dr Tony Holohan said that 7 per cent of cases notified in Ireland over the past fortnight have been associated with travel.

He noted that several EU countries have reported an increase in new cases.

Dr Holohan said the State’s National Public Health Emergency Team has “expressed a clear view that overseas travel poses a risk to importation of the disease and to further transmission in Ireland”.

He said that the European Centre for Disease Prevention and Control had “recently warned that the pandemic is not over . . . Ireland has made significant gains in suppressing Covid-19. Our task over the coming weeks and months is maintaining these gains.”

Dr Holohan made his remarks in a statement released by the department after the regular twice-weekly briefing scheduled for Thursday evening was cancelled.

Deputy chief medical officer Dr Ronan Glynn said the disease is “accelerating globally with four million cases recorded in the last month. Considering the international experience with the disease, we cannot afford complacency. Continue to be aware of the risks and follow the public health advice designed to protect individuals.”

He referred again to the large number of cases among younger people – more than a third of new cases in the past 14 days are under 35 years of age.

Meanwhile the Special Committee on Covid-19 Response has been told it is “inevitable” that Ireland will experience a resurgence in coronavirus cases as restrictions are relaxed.

Expert in infectious diseases Prof Paddy Mallon said on Thursday that the country is still within a geographical high-risk zone for coronavirus.

“I and others in the infectious diseases clinical community believe that it is inevitable that we will experience a resurgence of cases as we relax restrictions and permit more travel,” he said.

He told the committee the turnaround time for testing “is not good enough” at two days when there is a low rate of community transmission and this should be one day. Health Service Executive officials could not however give a commitment to a 24-hour turnaround time.

Prof Mallon also warned “we will be making trouble for ourselves” if unrestricted movement is allowed from countries where there is “uncontrolled community transmission” including the United States, South America and parts of eastern Europe or Asia. And he said understaffing in the health service is a huge problem and similar success in dealing with the pandemic could not be expected in the autumn with a resurgence based on current staff numbers.

“We got away by the skin of our teeth largely due to the biggest non-pharmaceutical intervention the country has ever taken, which was mediated by the public. We did not get away with this because of the capacity in our healthcare system.”

The professor of microbial diseases at University College Dublin was addressing TDs on the committee who were looking at testing and tracing operations to deal with the pandemic.

Prof Mallon warned that the likelihood of lockdown restrictions depended on two stress tests He said the first test for Ireland’s capacity to deal with a resurgence in Covid-19 cases will be in August when people decide if they’re going to travel overseas or not because we will inevitably have imported cases coming back into the country. The second is the onset of seasonal influenza in the autumn.

He said a resurgence could emerge very quickly similar to what happened in Victoria, Australia, where in a matter of days the country went from being Covid-19 free to a situation where one million people “almost cannot leave their homes”.

A resurgence in coronavirus cases could emerge very quickly and the capacity to deal with it and avoid severe restrictions depends on the ability to test and trace contacts quickly, he added.

“If you get a large number of people returning to the country from overseas and you’ve a wide geographical spread of community transmission and you can’t test and contact trace efficiently the only way that you’re going to control that is by returning to mass lockdown,” he told Fianna Fáil health spokesman Stephen Donnelly.

They had begun designing a new model of “sustainable testing service that will deliver short turnaround times” with effective contact tracing, to be in operation by late August and in use for at least 18 months.

Questioned by Fine Gael TD Colm Burke, Dr Henry said they should be able to ramp up testing at “extremely short notice”.

He told Sinn Féin health spokeswoman Louise O’Reilly he was confident of hitting a target of 72 hours.

HSE national lead for contact tracing and testing Niamh O’Beirne said that under the current infrastructure it “isn’t always possible to achieve” a one-day turnaround for testing in the community.

But she could not give a commitment of a 24-hour turnaround time when asked by Mr Brophy if it is possible. Ms O’Beirne said that when they build the new long-term testing service “we will look again at our metrics and our pathways”.

But insisting that the turnaround time should be one day for testing, Prof Mallon said the importance of containing infections at borders becomes higher as the level of transmission drops off.

He warned that “if you want to maintain community transmission at minimum it’s important to have a robust screening methods at the point of entry”.

He said that a different response to someone coming from New Zealand compared to Texas “might be a pragmatic approach. Focus your testing where you’ll get the most return for your time and expense.”