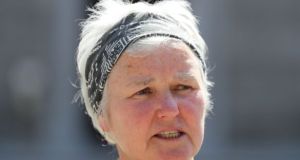 Both the judiciary and the Minister for Justice have strongly criticised a personalised attack by People Before Profit (PBP) TD Bríd Smith on a High Court judge.

Charlie Flanagan has written to both the Chief Justice and the Ceann Comhairle of the Dáil, Seán Ó Fearghaíl, to express his concern at the comments on the judge.

Referring to Ms Smith’s Dáil comments, Mr Flanagan said they were “highly personalised, inappropriate and inflammatory”, representing “an attack on democracy itself”. Such “baseless and dangerous rhetoric should not go unchallenged”, he said.

He has asked the Ceann Comhairle to take “appropriate steps”. The Ceann Comhairle has previously warned TDs about seeking to interfere or comment on court cases, which is a breach of parliamentary rules. Mr Flanagan, in a post on Twitter, said he believed the comments were “sinister”.

The Association of Judges of Ireland said it “condemns in the strongest possible terms” comments by Ms Smith on social media and in Dáil Éireann.

The deputy had made her remarks following the striking down of a law guaranteeing minimum pay in the electrical workers sector by Mr Justice Garrett Simons.

The judges said it was the right of any person to disagree with a ruling of a court but “the comments made by Ms Smith go far beyond what is acceptable in a properly functioning democracy founded on the rule of law”.

On Facebook and on Twitter, Ms Smith and her party had made a number of “outrageous and unwarranted comments” in relation to Mr Justice Simons, the judges said.

The comments of the politician “amount to an extraordinary and wholly unjustified attack on the integrity and independence of the judge”, they said.

“The suggestion that the judge’s judgment was ideologically motivated is baseless and dangerous. That such comments should be made by a member of Dáil Éireann is particularly concerning.”

The judges pointed out that in his ruling, Mr Justice Simons, after considering the law and the evidence before him, had ruled against the State.

“In many jurisdictions, the judiciary do not enjoy that degree of independence. In others, the exercise of such independence often comes at a significant price. Judges who make unpopular decisions are subject to rhetorical attack that aims to de-legitimise the judicial process and undermine public confidence in the independence of the judiciary, frequently by falsely ascribing political motivations to judges. Such rhetoric endangers the rule of law.”

Earlier this week, Ms Smith responded to a ruling by Mr Justice Simons where he found that a sectoral employment order, made by Minister for Business Heather Humphreys, had been made outside her powers and was unconstitutional, thereby striking down a law guaranteeing minimum pay in the sector.

In a post on Ms Smith’s Facebook page, Mr Justice Simons was photographed in a meme with the wording: “This is Garrett Simons. He’s a high court judge. He earns over €200,000 a year. And he’s just put the boot into workers.”

Ms Smith said in the posting: “The irony that a judge earning over €210,000 a year can be worried that an electrician on €45,000 may be overpaid will not be lost on the workers affected.”

Contacted by The Irish Times, she defended the comments, saying she focused on the judge rather than his ruling because “he made it”.

On Thursday, after Mr Flanagan’s comments, she said she was waiting “with baited breath” for Fine Gael to defend workers.

In comments on her Facebook page, Ms Smith referred to Mr Justice Simons as a “right-wing judge”.

Ken Murphy, director general of the Law Society, said it was perfectly appropriate for a politician to disagree with a judge’s decision.

“It is not appropriate, however, for a politician to launch a personalised attack on the impartiality or the integrity of a judge.”

Ms Smith’s comments were also criticised by the chairman of the Bar Council. “A personalised attack on a judge by a member of Dáil Éireann amounts to an attack on our democracy and is something that all of society should be gravely concerned about,” said Micheál P O’Higgins SC.

Mr O’Higgins said the coarsening of public discourse on social media was a depressing reality of the world we live in.

“Using that platform to make populist and personalised attacks on judges – who cannot personally defend themselves – debases politics and endangers citizens who look to the courts for protection,” he said.

“If gratuitous personalised attacks on judges were to become the norm, this would make it extremely difficult for judges to fulfil their role and would ultimately undermine the proper administration of justice.”