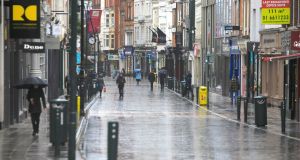 Members of the public brave the bad weather during the Covid-19 Coronavirus pandemic in Dublin’s city centre on Tuesday. Photo:Gareth Chaney/Collins

Taoiseach Micheál Martin sought to describe a path to the future on Tuesday night, but it is clear that a difficult few weeks lie ahead for the country and its Government before the worst days of the third long, long lockdown end.

As had been well advertised in advance, the lifting of restrictions is minimal; unless you have young children in primary school or childcare, most measures are extended without change.

It was a better performance from the Taoiseach than some of his recent outings, but there was no cheering, for sure.

The Zero-Coviders, now with significant political support from the Opposition (even if sealing the Border is a no-no for Sinn Féin), warn that it will mean a fourth wave and a fourth lockdown.

Lobby groups press for reopening; the Minister for Finance frets at the cost of it all. TDs pass on to Ministers the frustrations of parents, businesses and those on the front line of caring for the vulnerable; half the country seems on the edge of a nervous breakdown. Social media and radio phone-ins display a rising level of anxiety and anger, much of it directed at the Government. Sometimes it’s the Government’s job to be a public punchbag.

Cautious and conservative, the Ministers coo. But externally the pressures are mounting.

Even some of the public health hawks in Government think the pace of reopening is too slow. Take the schools – if you believe the absence from school is so damaging to children that you are prepared to put everything else on hold to get them back, then how can you justify leaving many of them at home for another three weeks, and most secondary school students at home until mid-April? That’s six weeks away.

The explanation offered for this near-paralysis is the deep scarring in Government from the third wave: Ministers are terrified of diverging substantially from the public health advice, whatever the social, psychological and economic costs of continuing lockdown. It’s understandable, even if it amounts to the age-old mistake of generals: to fight the last war.

No one seems to bear this more heavily than the embattled Minister for Health, Stephen Donnelly, now the subject of questions to his colleagues about whether they have confidence in him. In the case of at least some of them, the private and public answers are different. Perhaps tellingly, he was not present at the press conference on Tuesday night.

And yet all that caution and conservatism doesn’t extend – for some reason – to a sufficiently accelerated system of quarantine. If an outbreak of a new variant derails the reopening, what is the Government going to say about its tardy implementation of hotel quarantine? How will that look?

Ultimately, though, the few weeks ahead will be less important than the few months that follow.

The rollout of the vaccination will matter more than the final few weeks of lockdown. If the Government can manage to organise the administration of a million, or more, vaccines a month from April onwards, then things will look very different indeed by the time the summer comes.

If it can’t however, the public is likely to question its basic competency. We have seen how the disastrous handling of the pandemic by Boris Johnson’s administration in the UK seems to have been largely forgotten because of a rapid and successful vaccine rollout, the success of which piles the pressure on here. If the Government stumbles on the pace of the rollout, the opposite could happen.

It is hard to see how the administration could survive the public concluding it had bungled its most important task. Or whether it would deserve to.