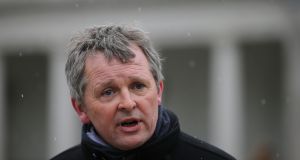 The Government must offer hope and restore public confidence when it unveils its revised Living with Covid plan on Tuesday, Opposition politicians have said.

However, there has also been severe criticism by the Opposition of measures that are expected to be announced in the plan, including moves to reopen schools for some students as early as next week.

And there have been widespread claims that the Government’s plans for mandatory quarantining in hotels for some incoming travellers don’t go far enough.

Taoiseach Micheál Martin will give a live address to the nation after 6pm when the revised Living with Covid plan has been announced.

People Before Profit TD Richard Boyd Barrett claimed the Government’s handling of the pandemic has been “shambolic” and the expected proposals in the revised plan are “dangerously defective”.

He said the proposals “threaten to undermine the huge effort that people have gone to during the lockdown and indeed will prolong the agony of the lockdown”.

He argued that there has been “mixed messages” from the Government, contradictions among Ministers, and no sense of a “coherent plan”.

“I have to say they’re losing the confidence of the people,” he added.

“What people are saying to us increasingly is they want hope, they want real strong leadership.”

Mr Cullinane accused the Government of taking “half-measures”, citing the plans for mandatory hotel quarantining which will be initially limited to passengers arriving from 20 countries.

He also said there should be a mandatory requirement that people travelling here from abroad take PCR tests five days after arrival, as at the moment this is advisory.

Labour leader Alan Kelly said his party will table amendments to the legislation on mandatory quarantining in hotels so that it would cover all arrivals to the State apart from essential workers.

He said: “I think the public are absolutely behind this,” adding that the new variants of Covid-19 are “too dangerous and we need once and for all to deal with this issue”.

Mr Kelly said he wants to see very few dates in the Government’s plan, adding: “What I really want to see is hope, I want to see metrics as regards what we can do . . . based on public health advice.”

He claimed the Government has “insulted” the public and lost the public’s confidence in relation to the handling of the pandemic.

“I want to see a plan tonight that actually tries to regain public confidence,” he said.

Mr Kelly questioned if people will adhere to the Government’s instructions if the public is “taken for granted”.

Social Democrats TD Holly Cairns claimed that expected contents in the plan will be “a continuation of a strategy of rolling lockdowns”.

She said this will be “very disappointing to many people”.

She said her party will also seek to amend the legislation on hotel quarantining so it applies to more people travelling from abroad.

Mr Boyd Barrett claimed that the Government has failed to ensure schools will be safe, with adequate space and ventilation, for a return of students.

He claimed that the return to school will be a “dangerous gamble”, given the levels of the virus at the moment, and that plans in this regard relate to what he described as “the Government’s absolute obsession with the Leaving Cert”. He suggested an alternative to the Government’s plan would be to allow open access to third-level education by expanding the number of places.

He also accused the Government of failing to police the stay-at-home instructions for non-essential workers and also criticised the plans for hotel quarantining.

Rise TD Paul Murphy claimed the plan for hotel quarantining is “half-arsed” as it will only apply to a “handful of countries”.