People ‘exhausted’ by restrictions with easing some way off, Coalition leaders say 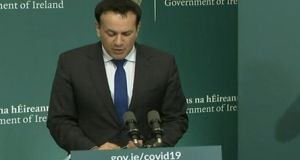 Leo Varadkar said there are “grounds for hope and reason for optimism”, and that the “virus is in retreat, both here and globally”.

People are “exhausted” by Covid-19 restrictions, and while there are “grounds for hope and optimism”, substantial easing of restrictions is some way off, coalition leaders have said.

While the Government has published its new plan for managing the pandemic, the party leaders and public health chiefs acknowledged on Tuesday that identifying the exact metrics to determine if and when reopening would take place was not yet clear.

At a press conference at Government buildings on Tuesday evening, Leo Varadkar, the Tánaiste and Fine Gael leader, said that people are “exhausted” and a lot of people are depressed and parents are struggling with home-working and home-schooling. However he said there are “grounds for hope and reason for optimism”, and that the “virus is in retreat, both here and globally”.

He said globally, data on vaccinations is “really encouraging”. He said some routine health services would be resumed in the weeks ahead, such as cancer screening. “If things work out and we keep the virus suppressed, we can look forward to more restrictions being eased after Easter”.

He said that he regretted that clarity could not be given to those on the pandemic unemployment payment, but that the “safety net” of payments to people and businesses would continue, the commercial rates waiver would be extended, and sector specific supports would also be continued.

Eamon Ryan, the Green Party leader, “we have the prospect of getting to a safer place but we’re still not there”, and that public health advice was that there was a significant risk in the coming weeks that the State could still “slip up”.

“We’ll have to start working hard as a government and preparing the recovery particularly for the business community”. He said that international travel will not be returning “any time soon”.

Dr Ronan Glynn, the deputy chief medical officer, said that the emerging data on vaccines are “really promising” and that vaccination will become “our most powerful tool against Covid-19”. He said that “there are brighter days ahead, but in the meantime, we know what works, we know how to do it, and we know we can do it well”.

However, the Taoiseach and Dr Glynn were unable to clearly express the exact metrics that would be used to measure progress, or determine if further reopening could take place. Mr Martin said that if the country moves above 1 in terms of the R number, which assesses how quickly the disease is spreading in the population. “Obviously if we move significantly above that, it would be a problem clearly”. Dr Glynn said that an R number above one right now, given the levels of disease in the population “would be very concerning”, but less so if there were only 10 or 20 cases per day.

“It’s vital that people continue to do what they’ve been doing, at least to the end of March and into April,” Dr Glynn said, conceding that “it would be much simpler to be able to say ‘these are the three or four things and when we hit them we move forward”.

Mr Martin said that the decision to keep the current level of restrictions and exemptions on construction was not to do with the sector specifically, but rather focused on keeping overall levels of mobility down. “We just simply are not in a position to reopen that quickly,” he said. “But if we stick with this in the month of March and to the fifth of April, we will reassess.”

He said that despite news that AstraZeneca vaccine volumes for delivery to the EU have been hit by yet more supply shortfalls, the biggest challenge for the state will be administering all vaccines, rather than the supply.

Asked about differences between the State’s Covid restrictions and those in the North that may be heralded by changes announced by prime minister Boris Johnson, Mr Martin conceded that while there is currently alignment, “there may come a time when they diverge given the decisions that have been taken by the UK government”.

He said that when the population is significantly vaccinated “that does give us options”, but wouldn’t be drawn on precisely what that might mean in the weeks and months ahead.

Body of third man found near where two brothers murdered on Cork farm 13:18
Order halting works on Sandymount cycleway issued by High Court 13:15
Two further Covid breaches committed by US troops at Shannon 13:13
Coronavirus search: How is Covid-19 spreading in your area? 13:10
Jack and Grace most popular baby names in 2020 12:26