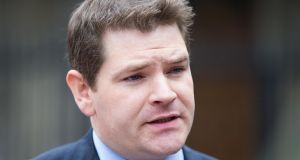 Minister of State for Local Government Peter Burke has pledged that the €8,000 pay increase recommended for councillors will be implemented within the Coalition’s first year in office. File photograph: Tom Honan/The Irish Times

Fine Gael Minister of State for Local Government Peter Burke has pledged that the €8,000 pay increase recommended for the State’s 947 councillors will be implemented within the Coalition’s first year in office as promised in the programme for Government.

He acknowledged that “the issue [of the pay increase] is going on far too long” for councillors who currently earn €17,600 a year for what the junior minister said was “significantly more than [the] 18.5 hours”of work a week set out in the Moorhead report on the role and salary of councillors, which recommended a €8,000 pay increase. Other studies showed councillors work 32.5 hours a week.

Mr Burke said he and Minister for Housing Darragh O’Brien had put forward a proposal to Minister for Public Expenditure and Reform Michael McGrath on the issue that was “robust, transparent and will stand up to highest scrutiny”.

He acknowledged that “many good people” were being lost from local authorities because of the current conditions, adding that as well as being members of a council, councillors also have to fill 1,100 places in 360 statutory agencies and 1,010 places in 400 non-statutory agencies.

Mr Burke said a working group is in place to implement reforms and he wanted to see councils as a “reflection of society at large in terms” of their diversity.

Mr Burke was speaking during a Seanad debate on a motion brought by the Independent group of Senators calling for the Coalition to act on its commitment in the programme for Government to increase councillors’ salaries and to state when the €8,000 rise would come into effect.

Independent Senator Gerard Craughwell, who introduced the debate, expressed his disappointment that contrary to media reports the pay increase had not been signed off by the Cabinet.

Mr Craughwell said the only reason there could be for “this unforgivable heel-dragging” was cowardice. He said political parties “are afraid to upset the public by giving pay increases to those who are on the lowest rung of the political ladder”.

He said it was ironic the Seanad was debating the issue amid media reports of possible further pay increases for TDs. “They are not afraid to accept pay increases and increased numbers of ministerial positions and advisers themselves.”

Fine Gael Senator John Cummins said that “it is only right and proper to pay workers at least the minimum wage [of €10.20 an hour] and that is precisely what we have not been doing with city and county councillors”, something which had resulted in the loss of “some exceptionally talented people”.

Fianna Fáil Senator Mary Fitzpatrick said that “for women who will give of their time and take time out from their families and careers to serve their local communities, the minimum they deserve is to be provided with maternity leave”.

Green Party Senator Pauline O’Reilly said a party colleague had been a full-time nurse with five children and had had to give up her job as a nurse to do her job as a councillor. Councils were supposed to reflect society but there were councils “where we do not have people from diverse backgrounds” as well as councils where just 6 per cent were women, she said.

The reform “took away power, loaded on work and did not tackle the key issues of local government reform”, she said.