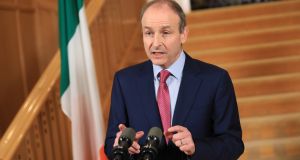 Any reopening plan in the age of Covid-19 is fraught with danger. At one level, our experience of the disease tells us that any attempt to set a course for the coming months is mere hubris in the face of a threat that has always been unpredictable but has been made far more so by the emergence of new, more transmissible strains.

Any plan is liable to be torn up by the epidemiological reality, as the Government has learned to its cost, having had to amend its original Living with Covid framework almost as soon as it had been published last September. Scarred by the national emergency that followed what was, it is now clear, a misguided re-opening in December, ministers are rightly worried about relaxing prematurely.

Still, there is a political imperative to provide the public with a sense of the direction of travel. Across the country, people are hurting. Many have lost loved ones. Others are without work, have had their wages slashed or struggle daily with the mental burden of these lonely, stressful times. So in producing a new iteration of its exit strategy, the Government had to strike a careful balance, indicating priorities and providing clarity where possible but withholding false reassurance and retaining for itself the space to execute a sharp turn if necessary.

Of most importance is the timetable for reopening schools. It should have happened sooner, but the gradual return to education over the coming weeks is an essential step. It will not undo the damage done to many children, especially those from disadvantaged backgrounds, by the latest extended closure, but it is correctly prioritised in the new plan. The State must do everything in its power to keep schools open from now on. More broadly, the Government is right not to bind itself to an explicit schedule or to link each step in the reopening schedule to certain criteria. The situation remains too fragile and too unpredictable for that.

The public has shown it can fulfil its side of the bargain. The onus now is on Government to show it can steer the country through what we all hope will be the final stage of the crisis. Its botched communications in recent weeks do not augur well. But the biggest test it now faces is the vaccination programme that promises to “transform the landscape,” as Taoiseach Micheál Martin put it yesterday. The rollout to date has been too slow – for reasons of supply that were, for the most part, beyond the State’s control. But it is quickly picking up pace, and the ramp-up in deliveries signalled by the Taoiseach in his televised address – a million doses every month from April onwards – will place responsibility for the rollout solely on the shoulders of Government.

Get it right and the worst of this nightmare will soon be over. Get it wrong and we will pay a heavy price.