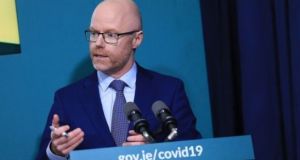 Opposition politicians have strongly criticised Minister for Health Stephen Donnelly for comments where he said he could not confirm details of the reopening of schools and incorrectly said talks with unions were still ongoing.

However, they stopped short of calling for his removal as Minister.

Labour leader Alan Kelly has questioned the “competence” of the Minister after the comments on RTÉ’s Claire Byrne Live Show claiming they were “embarrassing” and “scary”.

Mr Donnelly clarified his comments on Twitter last night saying: “re return of schools - Meetings with the teaching unions concluded early this afternoon. Government intends making an announcement after Cabinet in line with plans as already outlined”.

It is expected there will be a return to schools for Leaving Cert students and younger primary school pupils from next week.

“The Minister misspoke – he was advised before going on air that union officials were going back to their executives with the proposals and understood this to be that the process was not complete.”

Mr Kelly claimed Mr Donnelly had misunderstood what had been discussed by Ministers earlier that evening and added: “There now appears to be a serious issue of competence.”

The Tipperary TD questioned if Mr Donnelly’s workload is too great, pointing to how his Department has been tasked with bringing in the legislation for mandatory hotel quarantining.

Mr Kelly suggested this should have been handled by the Department of Justice.

He said a motion of no confidence in Mr Donnelly would not be helpful at this time and it was a matter for Taoiseach Micheál Martin, Tánaiste Leo Varadkar and Green Party leader Eamon Ryan to deal with.

Mr Kelly asked what they would do to change issues with Mr Donnelly’s communications and the large workload at the Department of Health and “in some way help him through what is the biggest crisis in our country in our lifetime”.

The Labour leader said in normal times he probably would table a motion of no confidence but added: “We’re in the middle of the pandemic.”

Mr Kelly also claimed: “Last night was scary. It wasn’t just embarrassing for him, it was scary for all of us. When you’re embarrassed for someone looking at them performing on a live show like that and what he had to do afterwards. That’s deeply concerning for where we’re going as a country.”

Asked if he’d prefer someone else in the job, Mr Kelly said: “That’s a matter for the Taoiseach, but ultimately here I don’t believe he [Mr Donnelly] is having a good tenure.”

Sinn Féin’s health spokesman, David Cullinane, said he doesn’t believe it’s the time for a motion of no confidence in Mr Donnelly, saying: “I think people are looking for solutions . . . what they want from the main Opposition party is for us to be constructive and put solutions on the table.”

He called on Mr Donnelly and other Ministers to “get their act together”.

Social Democrats TD Gary Gannon also criticised Mr Donnelly’s television appearance saying the minimum expectation he would have for a Minister talking about the return to schools is that they would be informed and the information would be accurate.

The Irish Times has sought a comment from Mr Donnelly’s spokesman.

Mr McGrath said: “He is working incredibly hard and is under enormous pressure in managing the health portfolio at a time of a global pandemic – he has the full support and confidence of Government.

Mr McGrath told RTÉ Radio’s News at One: “This is a Government that is working collectively, and we need to do all we can to support Minister Donnelly in the huge body of work that he, his officials and of course all of our frontline staff in the HSE are currently doing.”