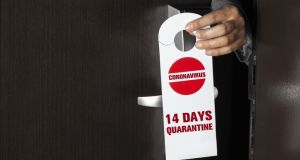 Bill will create a series of offences for leaving designated facilities. Photograph: iStock

Government plans to introduce mandatory hotel quarantine are “box ticking” and do not go far enough, opposition parties have said ahead of a scheduled Dáil debate on the issue this week.

The Bill, which would see travellers from some 20 countries forced to isolate in hotels on arrival in the State, will also create a series of offences for leaving designated facilities, refusing Covid-19 testing, or endangering the life or welfare of another person in a quarantine hotel.

However, the Labour Party and Sinn Féin are calling on the Government to extend the regime to all arrivals into the State, apart from essential workers. Speaking on Tuesday morning, Sinn Féin health spokesman David Cullinane said the regime “doesn’t go anywhere near enough for us”.

“It doesn’t make sure we have mandatory hotel quarantine for all non-essential travellers, (there is) no legal requirement for a mandatory PCR test post arrival on day five - it’s still advisory for those quarantining at home, we still don’t have data sharing with the North, which is absolutely outrageous, and we still don’t have testing and tracing right.”

Labour Party leader Alan Kelly said that the party will put down amendments to cover all travel bar essential workers coming into the country. “I think the public are absolutely behind this. The variants are too dangerous and we need once and for all to deal with this issue.”

Mr Kelly, who today questioned the “competence” of Minister for Health Stephen Donnelly, promised “intense questioning” in the Dáil this week as the hotel quarantine is debated.

Róisín Shortall, the Social Democrats co-leader, said there were several potential loopholes in the bill, including the requirement that someone arriving into the State, but not through a port or airport, had to present themselves for quarantine. She also said there were potentially issues around exemptions being granted to mandatory hotel quarantine by doctors who could allow for people to finish their isolation at home.

She also said people who are resident in Northern Ireland and coming through the State would not be covered by the legislation. “That’s a fairly major gap and will drive traffic through Dublin Airport in particular,” she said.

“All of these things combined with the apparent determination of the Government not to go beyond the 20 countries leads me to believe this is more about box ticking, rather than being really serious about sealing our borders.”

The Social Democrats will introduce a single amendment which would allow the Government to make travellers from entire regions or groups of countries eligible for mandatory quarantine.

Labour will put down a single amendment to the bill, seeking to define all states outside the island as “designated states”, instead of the intended two-tier approach which would see mandatory hotel quarantine only for a limited subset of countries where there is a greater risk of variants of concern, such as the Brazilian or South African mutations.

Sinn Féin will table six amendments, designed to enable data sharing with the North, to include a requirement for post-arrival tests, extend quarantine, and to force the Minister for Health to consult with the Chief Medical Officer when making regulations to enforce the regime.